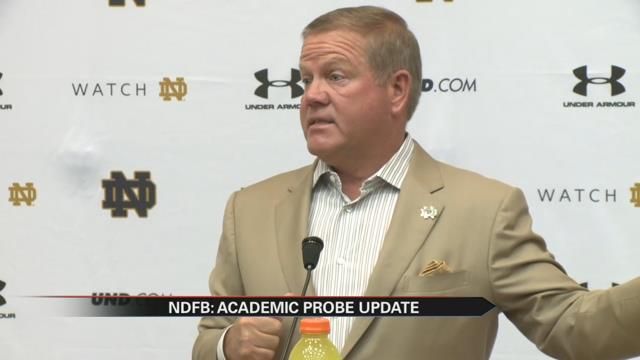 The team slogan this year is "Culture over Scheme."

Kelly said, "We know we've got a collection of good players. That's not going to win! The culture will win!"

Coach Kelly and the players said this year their season will be dedicated to staying focused in the classroom and in the game.

According to the coach’s poll, Notre Dame football is ranked 11th this year.

Junior wide receiver Corey Robinson said, “It’s establishing a winning culture that’s important for any championship team. You look at the San Antonio Spurs, not to name drop or anything, and they have all the talent in the world but the reason they’re so successful every year is because they have that professional winning culture.”

Robinson and linebacker Jaylon Smith said they are buying into the new “culture over scheme” motto.

Jaylon Smith said, “To me it’s sticking to who we are, what we’re true to and not necessarily the scheme or the game plan the culture will defeat or uphold that!”

Kelly said he has more confidence going into this season.

Kelly said, “I sleep better, I know that. I mean thinking about all those freshmen that we had to play and then the guys that we had to line up at USC it just gave me a nightmare! And then I come back and think of where we are right now, it’s just a different unit.”

Training camp starts on Friday at the Culver Academies and last year they had team bonding activities like sailing and horseback riding.

Stanley said, “We get fans in our room this time! So that’s a plus! They had AC but it was a little hot. They have fans now so that’s the only thing I know of."

Cornerback KeiVarae Russell was cleared to practice and play following following the investigation.

Kelly is excited to have Russell back as a vocal leader.

Kelly said, “Now he’s loud! Extremely loud! And with that loudness you think sometimes it’s going to be on the other end of that loud scheme of things. It’s not. It’s extremely positive. He brings a positive energy!”