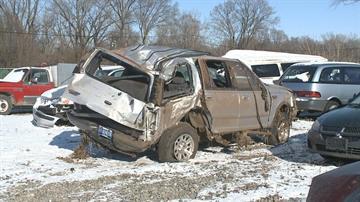 The Ford Expedition was driven by a 14-year-old boy who lost control of the car s it was heading southbound on Quince.

The car left the road, went into a ditch and rolled over several times before it came to rest in a ditch.

The driver and a 13-year-old passenger were both taken to an area hospital with non-life threatening injuries. Corey Downhour, 12, of South Bend, was pronounced dead on the scene.

Investigators told ABC 57 news that the vehicle belonged to a 17-year-old that was home at the time. It's not clear if that person allowed them to borrow the SUV or if they took it without his permission. The 17-year-old is not cooperating with the investigation.

Investigators said that it appeared that none of the kids were wearing seat belts.

Deputies are working to determine exactly how the youths came into possession of the SUV and what factors lead up to the crash. Toxicology report results are pending and may not be available for several weeks.

The Names of the 14 & 13-year-old have not been released because they are both minors.

Investigators are also working to put together a time line of events leading up to the crash and are asking anyone with information regarding the youths activities and whereabouts prior to the crash to contact Major Dean Chandler at 574-235-9611.