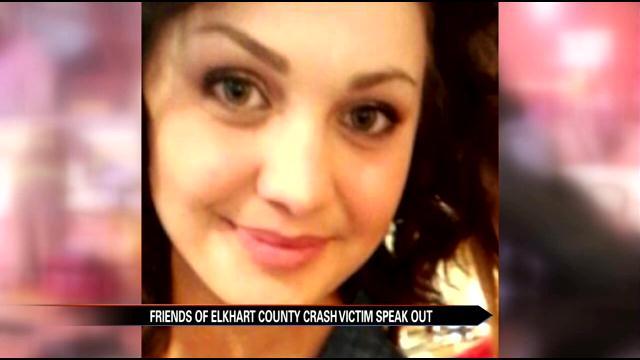 A 21-year-old man was seriously injured and his 15-year-old passenger was killed when the car he was driving struck a tree Sunday morning in Elkhart County on County Road 20 near Kerighbaum.

The 15-year-old victim was identified as Taisiya Sharun.

“It was mostly shocking like I couldn't believe that happened to her out of all people,” said Sharun's friend Justyce Warren.

A small memorial surrounds the tree where the accident happened.

Timofey Karas was driving westbound on CR 20 when he lost control of the vehicle and struck a tree.

“It was a loud crash I thought it was a dream at first. My dad banged on the door and said somebody crashed in the tree we might need to help them,” said Josh Wooldridge, who lives right next to the crash.

Sharun was pronounced dead at the scene.

Friends of the teenager spent the day saying their goodbyes, posting photos and fond memories to her Facebook page.

“Tya was just a beautiful young girl. Who knew how to light up a room. Bubbly personality. It's just devastating I can only understand how her family feels right now,” said Christina Gruzdov.

“Just remember her personality. She was always nice. She was so fun to be around and its really sad that she's actually gone,” Warren said.
A Go-Fund Me account has been set up to help Sharun's mother pay for funeral expenses.

Meantime, friends of Karas pray for his recovery.

“He was one of the most loving friends you could have. He was always there for you if you needed him,” said Steven Borzeniatow.

Friends say Karas has a broken neck from the crash.

Elkhart County Police have not yet said if drugs or alcohol played a factor.