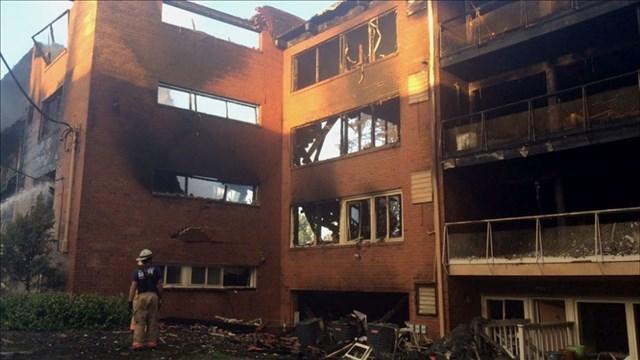 (CNN) -- Two people are dead and dozens more injured after an explosion sparked a massive fire that engulfed an apartment complex in a Maryland suburb of Washington, D.C., officials said Thursday.

The two bodies found in the ruins of the building in Silver Spring have not yet been identified, Montgomery County Assistant Police Chief Russ Hamill announced at a news conference Thursday morning. Several people are still missing, officials said.

Thirty-one residents and three firefighters were transferred to local hospitals with non life-threatening injuries, officials said at the news conference. The firefighters had minor injuries and were treated and released. About 90 people have been displaced by the blaze. Officials say the building is a collapse hazard and they are trying to make the structure safe.

The fire at the four-story Flower Branch apartment complex happened shortly before midnight Wednesday night, officials said. Investigators are still trying to determine the exact cause of the inferno. When asked about reports of the smell of gas in the area before the explosion, officials said they are at the preliminary stages of investigation.

About 150 firefighters rushed to the scene, where several residents had to be rescued from the upper floors. Other residents dropped children out of windows and then jumped to safety, Montgomery Fire Chief Scott Goldstein told CNN affiliate WJLA.

Ten-year-old Madelyn Fuentes had to leave her apartment with her family around 2 a.m. Thursday to go to a shelter.

"I got so scared. There were, like, people jumping out the window, like screaming for help and kids screaming because a lot of kids were scared," she told WJLA.

Other witnesses told the CNN affiliate they heard a loud "boom" and felt their homes shake. Firefighters at a station about six miles away told WJLA that they also felt the explosion.

Video from early Thursday morning shows one building engulfed in flames. The blast blew a gaping hole in parts of the building.

Photos taken at the scene later Thursday show shattered glass, bricks, wood and other debris scattered across streets, and clothes and other items hanging from trees.

CNN's Tony Marco and Sheena Jones contributed to this story.