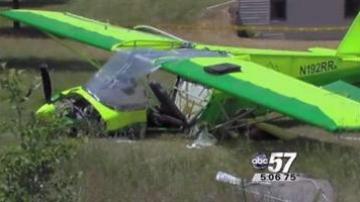 Witnesses say the plane crashed shortly after takeoff around 11:30 Saturday morning. Two people were on board. They ended up landing in a backyard.

First responders had to cut the couple out of the plane.

"I heard the plane come over the top of my house,” said Frank Carey. “ It flew a couple hundred yards to the south, made a 180 degree turned and headed back north, flew 3,400 yards, made another real tight 180 turn and then just nosedived right into the ground."

The unidentified pilot and his passenger are listed in critical condition. The FAA said it will take several weeks to complete this investigation.