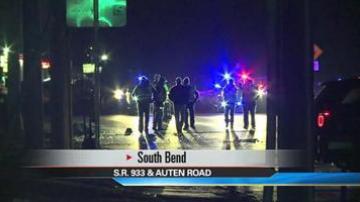 St. Joseph County Police found the bodies of 2 men on Indiana 933 near Auten Road in South Bend after receiving a call about a pedestrian-car crash.

Police said a person driving a red truck struck and killed 43-year-old Michael Marks. The driver of the truck stopped and police said there was no reason to believe alcohol was involved.

No charges have been filed against that driver.

Another person 49-year-old David Fordyce stopped to help direct traffic away from Marks' body. He was struck and also killed.

The driver who struck Fordyce fled the scene.

Police said the car that fled is an arcadia green 1992 Honda Accord.

"When this kind of event happens, pieces break off the car," said St. Joseph County Assistant Police Chief Bill Thompson. "These investigators are actually trained to take those pieces and make identifications of makes, models, and approximate years."

Authorities ask that anyone driving along 933 last night who may have witnessed what happened to please call St. Joseph County Police at (574)-235-9611.