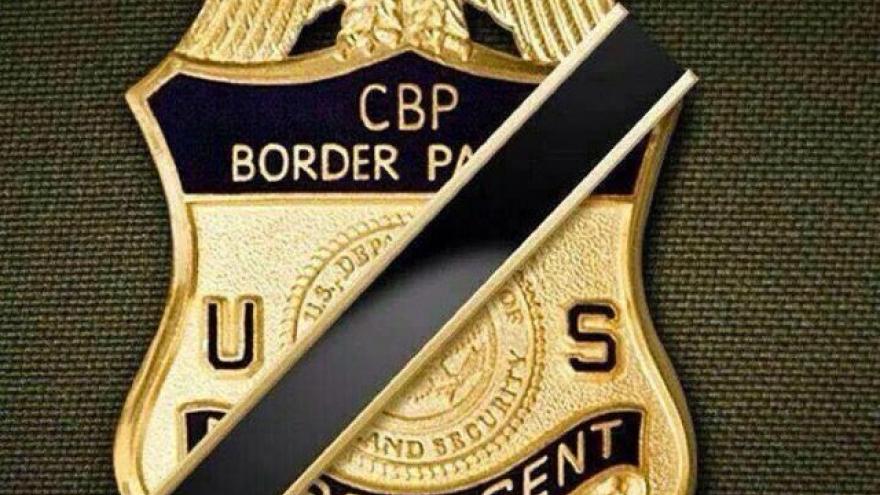 (CNN) -- Authorities are scrambling to find whoever killed a Border Patrol agent and hope a $20,000 reward will help lead them to the assailant.

Rogelio Martinez, 36, and his partner were patrolling near Interstate 10 in southwest Texas, US Customs and Border Protection said. They were responding to activity near the border, but CBP officials would not say what type of activity.

Martinez was responding to foot traffic that had set off sensors when he discovered a group, Chris Cabrera, president of the border agents' union, the National Border Patrol Council, told CNN affiliate KVIA. The slain officer was attacked with rocks, Cabrera told the station.

Authorities have not said how the two were injured, but a Customs and Border Protection spokesman said Martinez was not shot.

"On behalf of the quarter of a million front line officers and agents of DHS, my thoughts and prayers go out to the family and friends of Agent Martinez and to the agent who is in serious condition," Acting Secretary of Homeland Security Elaine Duke said in a statement.

President Donald Trump cited the incident as a reason why the US needs to build a wall along the border with Mexico.

"As you heard we lost a Border Patrol officer just yesterday and another one was brutally beaten and badly, badly hurt," Trump said Monday. "It looks like he'll make it, but very badly hurt."

On Sunday, Trumped tweeted, "We will seek out and bring to justice those responsible. We will, and must, build the Wall."

On Monday, Gov. Greg Abbott's office announced a reward of up to $20,000 through Texas Crime Stoppers for information leading to the arrest and conviction of whoever killed Martinez and wounded his partner.

"Our prayers are with the families of this Border Patrol Agent who was killed & the other who was injured in this attack in Texas," Abbott tweeted. "Our resources must be increased to prevent these attacks in the future. #txlege #tcot"

Texas Sen. Ted Cruz said the attack was "a stark reminder of the ongoing threat that an unsecure border poses to the safety of our communities and those charged with defending them."

"We are grateful for the courage and sacrifice of our border agents who have dedicated their lives to keeping us safe," Cruz said.

Customs and Border Patrol spokesman Carlos Diaz declined to describe the incident in detail, saying the FBI is investigating.

The Border Patrol's Special Operations Group and agents from CBP's Air and Marine Operations have been searching the area for potential suspects or witnesses.