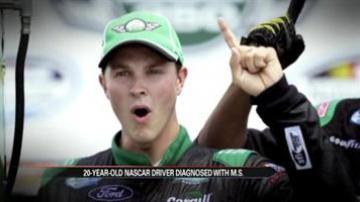 NASCAR fans were given sad news when it was announced that one of the sport's youngest drivers was diagnosed with multiple sclerosis.

Trevor Bayne, 22, won the Daytona 500 when he was 20 years old but the young racer says he has not let an MS diagnosis slow him down.

"I've been racing since I was 5 years old and this doesn't change a thing. I want to do things I've always dreamed of, and we have high hopes we can continue to do that," said Bayne.

His doctors and NASCAR have given him the green light to go ahead and race in this weekend's Sprint Cup Series and beyond.