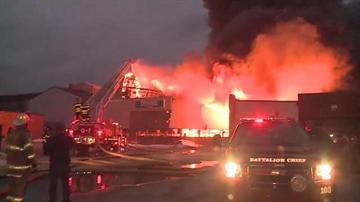 MISHAWAKA, Ind. -- The old RMG Foundry building still stands ten months after a massive fire. It was one of the largest fires Mishawaka crews have ever battled.

The fire started during the early evening hours and burned well into the night and early the next morning.

"It was startling," said former worker Pete Hallam. "I got a call from my mother in law who lives over here, so we came over here to check on her and then we came on down here and it was really blazing."

Wind was a major issue for firefighters trying to get the blaze under control.

Luckily no one was injured during the response.

Once the sun came up the extent of damage was visible for the first time to those in the Princess City. The old Dodge factory, which shut its doors years before, was the second home to many who worked there.

"I was hired in February 1967," said Cecil Smith who came to look at the damage. "It's devastating. You just have to think of the years you spent in there, this end is the steel shop, here."

At the time of the fire, the building was being used as a rental storage space for items like boats, cars, and RVs.

Anne Shutes stored a vehicle in the building. She went by the day after the fire to find out what happened to her belongings.

"It was my dad's car and I helped him restore it when I was a kid and he sold it to me," said Shutes.

Luckily for her, the 1968 Volkswagen Carmangia was found in perfect condition.

The building was a different story.

Crews had to wait for three weeks for the structure to cool down before going inside to continue their investigation.

ABC 57 was there in the beginning of March as roughly 35 people sifted through rubble, including insurance and legal representatives, the owner, and even the state fire marshal.

The cause was ruled undetermined.

Currently the fire department said it's waiting on insurance and legal work to be completed, and people to recover their belongings from the rubble before the building can be demolished.

The hope is demolition can begin in the early part of 2014.