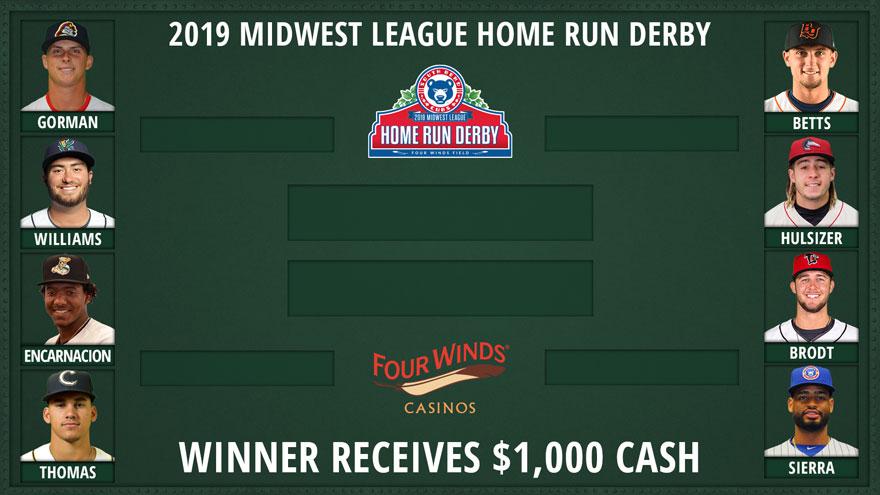 The Midwest League announced the players who will compete in the Home Run Derby at Four Winds Field on June 17.

Four players from each division will compete for a grand prize of $1,000.

Each round will be three minutes and the player with the most home runs in each matchup will advance to the next round.

Jonathan Sierra: Sierra was an international free agent signing of the Chicago Cubs in the 2015 signing period out of the Dominican Republic for $2.5 million. The tall, powerful lefty has hit two home runs this season with one banging off of the 1st Source Bank Performance Center at Four Winds Field.

Chris Betts: Betts was drafted by the Tampa Bay Rays organization in the 2nd round of the 2015 MLB Draft out of high school in California. Betts is another lefty with a ton of power and 11 home runs this season. This is his second All-Star nomination after being a 2018 New York-Penn League All-Star.

Niko Hulsizer: Hulsizer was the second player in Loons history to hit three home runs in one game on April 15 at South Bend. With 13 home runs this year, he is a leading candidate to win the Derby after capturing the first-place crown at the 2017 College Home Run Derby in Omaha (52 HR’s) before being drafted by the Los Angeles Dodgers.

Jake Brodt: With eight home runs, Brodt has burst onto the scene in the Midwest League this year with the Lansing Lugnuts, affiliate of the Toronto Blue Jays. He became the seventh D-1 player to hit 2 grand slams in the one inning for Santa Clara vs Boston College in 2018. Brodt finished the game with 3 home runs and 10 RBI.

Nolan Gorman: Gorman was taken 19th overall by the St. Louis Cardinals in the 2018 MLB Draft. As the winner of the 2018 MLB All-Star High School Home Run Derby, he is a favorite to reach the finals for the West. The lefty homered on his 19th birthday on May 10 in South Bend.

Jerar Encarnacion: Encarnacion has already hit more home runs this season than his first two years of pro baseball in the Miami Marlins organization combined. The power for the right has exploded in the Midwest League this year with his natural power ability to right field. In 43 games in the New York-Penn League in 2017, Encarnacion hit an impressive .284.

Chris Williams: The former Clemson Tiger Williams started his professional career last season by hitting 15 home runs in 62 games for the Minnesota Twins rookie level affiliate. So far in the Midwest League, he has powered out eight round trippers in 39 games played. In college, he hit 40 home runs in just three seasons.

Alek Thomas: Thomas is the son of Chicago White Sox Director of Strength and Conditioning Allen Thomas. The Chicago native was committed to play college baseball at TCU but was drafted in the second round by the Arizona Diamondbacks in 2018. Through the first half, he hit five home runs with Kane County.

Tickets to Fan Fest and all All-Star festivities are available by going to SouthBendCubs.com, calling (574) 235-9988, or visiting the South Bend Cubs box office.