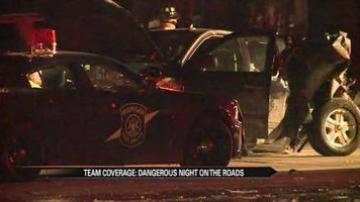 NILES, Mich. – A 21-year-old man died and his brother is recovering at the hospital after their vehicle collided with a semi at US12 and Third Street.

“Niles Township arrived on scene and the driver had to be extricated from the vehicle,” said Trooper John Miller of the Michigan State Police.

This intersection is known to be dangerous.

Miller was almost hit while explaining how the accident happened.

According to Miller, traffic was stopped at U.S. 12 and Third Street. The Avalanche was heading westbound and was struck by the commercial vehicle.

“I have an officer from our department out reconstructing the scene,” said Miller.

Although Miller says alcohol or lack of sleep did not appear to be the cause of this accident, it appears the semi driver may have been at fault.

“Right now it’s still under investigation. It appears that he was possibly at fault,” said Miller.

Traffic going westbound was rerouted for over two hours but has since been reopened.