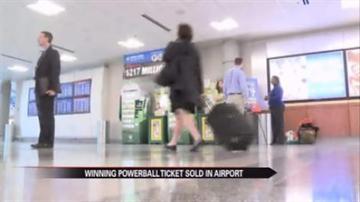 It was likely just a stop on their trip, but now a Virginia traveler is flying high thanks to a big win.

Wednesday's winning Powerball ticket was sold in the Richmond Airport, and it's worth $217 million.

The ticket was sold sometime in the last week. Now those who have flown through the airport recently are checking their tickets.

"Initially I thought 'I bet I know somebody that knows somebody that won it,'" said John O'Shaunessy, a traveler. "Once I found out that they won it here at the airport I said, 'That's crazy. They could be anywhere in the world.'"

The winner has 180 days to claim their prize and regardless of where they're from, they'll have to share a chunk of the change with the state of Virginia. They will have to pay up $10.7 million in taxes.