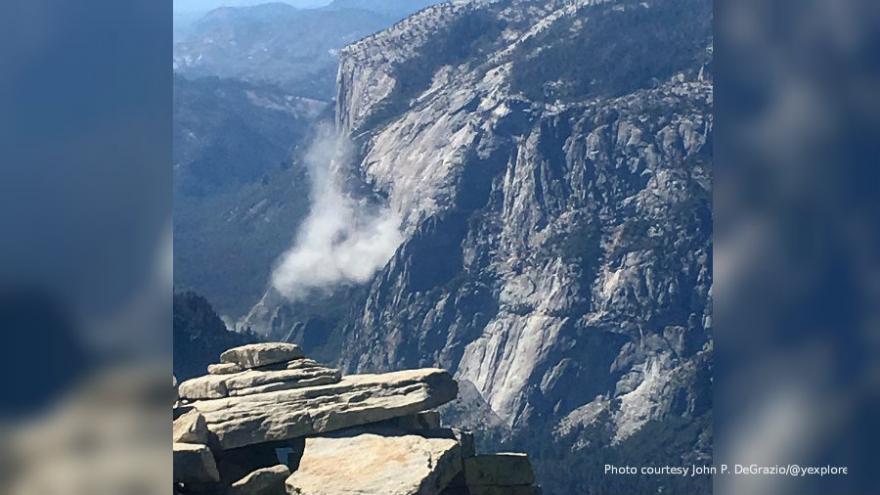 The tourist killed on Wednesday was identified as Andrew Foster of Wales. His wife was seriously injured, but her name has not been released by park authorities.

The injured woman was airlifted to a nearby hospital.

The couple were visiting the park from the United Kingdom and were there to rock climb, though they were not climbing at the time of the rockfall, the parks service said.

"Today's rockfall was significantly larger than yesterday," he said.

Rachel Evans, the wife of the man injured on Thursday said they were driving when the rockfall hit their car.

"Something came from through our sunroof, but we didn't know it was closed, we didn't know... what had happened but it shattered, and dust just poured in," she told CNN affiliate KGPE/KSEE.

"So we were trying to outrun it, it was like, 'go, let's go' and at the same time my husband reached up and he was like, 'oh my head, my head' because it was bleeding profusely and hurting."

Seven rockfalls occurred over four hours on Wednesday afternoon, the park service said. In all, the volume of the rockfalls weighed about 1,300 tons, and the irregular sheet of rock that fell was estimated to be 130 feet tall, 65 feet wide and 3 to 10 feet thick.

After Thursday's rockslide, the park remained open and Gediman, the public affairs officer, said visitors do not need to cancel their planned trips.

The fatal rockslide appeared to have started near the Waterfall Route, a "popular climbing route" on the east buttress of the famous, nearly 3,000-foot granite wall, the National Park Service said.

"Rockfalls are a common occurrence in Yosemite Valley and the park records about 80 rockfalls per year, though many more rockfalls go unreported," the park's statement said.

"The rockfall from El Capitan was similar in size and extent compared with other rockfalls throughout the park, though it is not typical that there were victims."

Guide John DeGrazio was giving a tour of the park when he captured the moment of the rockfall.

"We saw a huge plume of smoke from the summit of Half Dome and later found out it was a fatal rockfall," he said.

"I am a guide on a tour right now. We were on the summit of Half Dome when we saw this."

El Capitan is one of the world's most famous climbs, known for its near vertical cliffs. It was believed to be impossible to climb until 1957, when American rock climbing pioneer Warren Harding made it to the top with two aides.