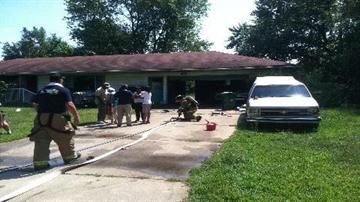 It took five area fire departments to get the fire under control.

It's reported that there were no fire hydrants in the area, so water tanker trucks were called in from area agencies.

It took fire crews 45 minutes to get the fire put out.

The fire was contained to the garage but the home suffered severe smoke and water damage.

The house was not damaged by the flames.

Three kids were inside the home at the time, they were able to get out safely.

The ages of the kids has not been released, at least one was a teenager.

It's reported that the mother was at work at the time of the fire.

The official cause of the fire remains under investigation but it appears that it may have been electrical.

The family declined assistance from The American Red Cross and will be making their own arrangements on a place to stay tonight.