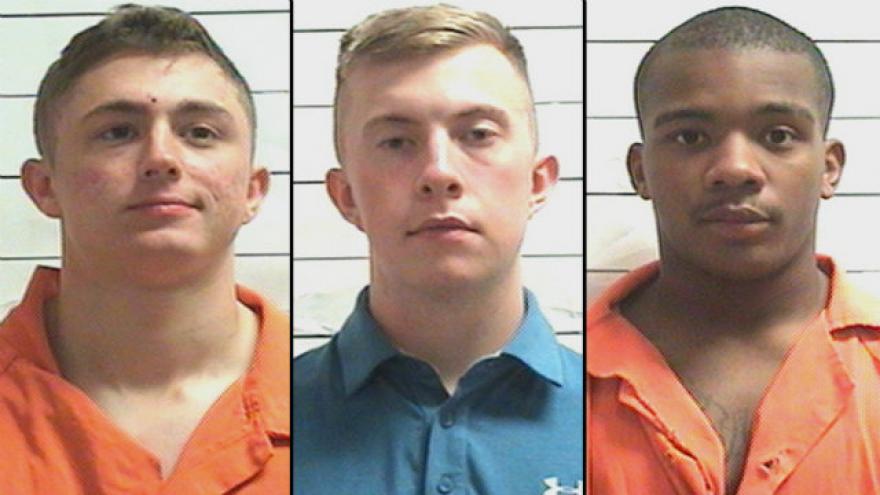 By Ralph Ellis and Artemis Moshtaghian

(CNN) -- Three US Marines have been charged with sexual assault in a case involving a Tulane University student and her friend in New Orleans, according to court documents from the Parish of Orleans in Louisiana.

According to police affidavits, the two women told police they went to a New Orleans bar on April 14, became intoxicated and left the bar April 15 with a man later identified as Landrum.

It's unclear exactly what happened at the residence, based on police documents and a university statement.

Tulane issued a statement saying the women met two individuals -- not one man -- at an uptown establishment and later went to the student's residence. A short time later a group of males "arrived and engaged in unwanted acts with the student and her guest. The subjects departed some time later," the Tulane statement said.

In the police affidavit for the Landrum arrest warrant, the woman who lived at the residence said Landrum forced himself on her and her friend. But the affidavits for Davenport and Anderson say "Male one (Landrum) engaged in sexual acts with both victims, which was (sic) allegedly consensual."

The second woman said she, her friend and Landrum had consensual sex but she began to black out, documents said. She said she vaguely remembered men coming into the bedroom and forcibly having sex with her, the documents said.

Landrum and Anderson told police they had sex with both women, documents said. Davenport didn't make a statement to officers. Landrum said he "called his friends to pick him up from the location, yet they entered the residence," the document said.

CNN has been unable to reach the Marines' attorneys for comment.

In another statement, Tulane said:

"Tulane University is doing everything it can to assist the New Orleans Police Department in this ongoing investigation. Tulane has offered the survivors of this terrible crime victim support services as they recover. Incidents like this underscore the dangers of sexual assault that are so pervasive throughout our society. Tulane is committed to ensuring the safety of our students both on and off-campus by its continued vigilance and university-wide efforts to end sexual violence."