300 Temporary PGA jobs could have permanent impact in Benton Harbor 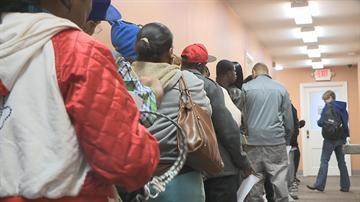 BENTON HARBOR, Mich. – Brief case by his side and dressed in his Sunday best, 54-year-old Perry Walker filled out his application Tuesday. “Got to dress to impress,” he said.

Walker was one of more than 120 people applying for 300 temporary jobs available in Benton Harbor for the Senior PGA Championship in May.

The Consortium for Community Development in downtown Benton Harbor is hosting several job fairs to fill the positions. Tuesday was the first of five. The job fair was held from 10 a.m. to 2 p.m. and a line formed an hour before the event started.

“I’m on the borderline right now,” said Walker, “I’m trying to find some employment so I can keep my house.” It’s been seven months since the local carpet store Walker worked at closed.

Walker has been looking for employment since and collecting unemployment.

“I want to get something to show that I don’t want to just collect unemployment,” Walker said. “I really want to work.” He doesn’t care if it is temporary.

“Any position, any way to make money and in a good way,” said 18-year-old Parnell Powell, when asked to describe the type of job he’s looking for.

Powell graduated from Dream Academy and could use the work before he goes to college this summer. “I’m very happy to get that little extra money in my pocket,” he said.

Pay for the positions starts at minimum wage and the maximum amount of time an employee can work is three weeks.

According to organizers, it can be more than just a little money. “That’s the ripple effect,” said Herb Caldwell with the Consortium for Community Development. “It’s something to put on their resume.”

The Consortium is working with vendors from the tournament and is doing the hiring. Caldwell said the experience is tangible and the first step to getting a full-time job. “They go to a potential employer and say ‘I worked the PGA golf tournament.”

“I’m hoping someone might look at that and see that,” said Walker. “I can get my chance to prove myself again.”

Two additional job fairs will be held this Wednesday and Thursday from 10 a.m. till 2 p.m. in the Consortium at 175 East Main Street. Applications will be taken for groundskeepers, security and parking.