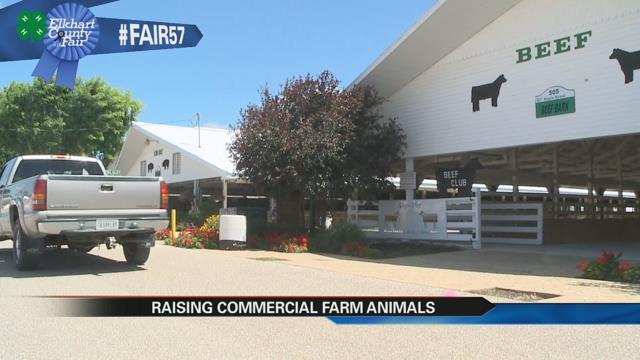 These days, 4-H isn’t limited to raising livestock, but it’s definitely one of the most popular activities.

Participants say it’s teaching them to pay attention to where their food comes from.

“We get those at a young age. We raise them and train them and teach them how to walk,” Shelby Swartz, a 4-H participant said of her calves.

Swartz is entering her last 4-H competition this year, showing her last dairy feeder calf before she’s too old for the club that she loves.

“Waking up at seven o’clock in the morning in the summer when all your friends are sleeping in, that’s hard, to go feed your animals or walk your animals,” Swartz said.

Swartz never names her calves, although she loves them, because she knows after the fair, they’ll be sold and processed for meat.

“It is a hard process to be able to cope with just because you have been with that animal for six, seven months,” Swartz said.

But despite the pain, Swartz says she can live with this food chain.

“You do need these animals in order to sustain and be human,” Swartz said.

The 4-H animals are raised in the loving care and attention of young adults.

“We’re so many generations removed from the farm now. People aren’t as connected with that, and I think 4H gives us the opportunity to teach that,” Robert Kelly, the extension educator for Purdue University 4-H said.

It’s a lesson Swartz says she’ll carry with her as consumer of food forever.

“I see it as the whole circle of life thing too,” Swartz said.

It’s that same circle of life that’s brought Swartz to the age where it’s time to say goodbye to 4-H, and hello to adulthood.

An, adulthood she says the club has more than prepared her for.

“It’s a great experience and I would not change it,” Swartz said.