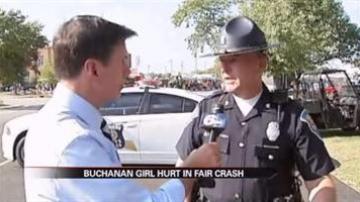 INDIANAPOLIS, Ind. -- A four-year old Buchanan girl was hit by a pick-up truck and sent to the hospital while at the Indiana State Fair.

Police say that Madalynn Gembala was walking her mom around the Indianapolis fairgrounds on Wednesday when she was struck.

"The child broke from her mother and stepped out from behind a pick-up truck and the driver headed south on the access road and was unable to stop," said Indiana State Police Sgt. Rich Myers.

ABC57 checked with Riley Children's Hospital on Thursday afternoon but they did not have an update on Madalynn's condition. Her parents work on the midway.

The truck driver was taken to the hospital for drug and alcohol tests. But police say he did not look impaired.