5 Dead as Russian helicopter shot down in Syria 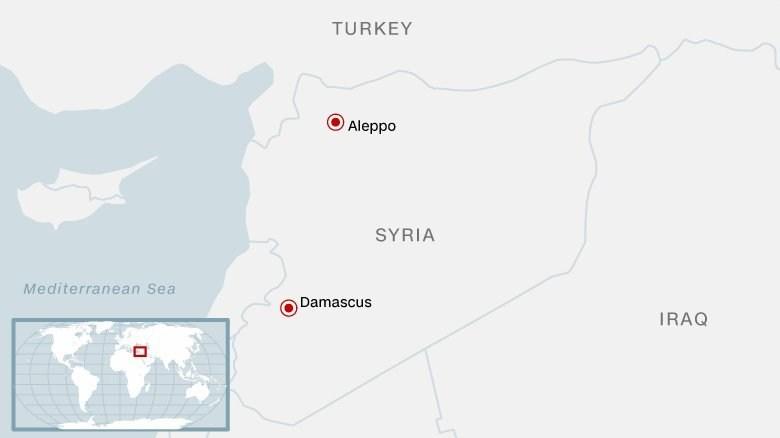 (CNN) -- A Russian helicopter was shot down Monday after delivering aid to the Syrian city of Aleppo, killing all five people on board, Russian state media reported.

It was the biggest single loss of life for Russia in Syria since Russian warplanes started carrying out airstrikes in September 2015 in the country ravaged by war for five years.

The Russian Defense Ministry said the Mi-8 helicopter was shot down by ground fire in Idlib province as it returned to base, state TV reported.

"Those who were aboard the helicopter, according to information from the Defense Ministry, have died heroically because they were attempting to steer the machine to minimize the casualties on the ground," Kremlin spokesman Dmitry Peskov told the state-run Sputnik news agency.

Video footage showed dozens of men cheering around the flaming wreckage, some of them taking photographs with their phones and others yelling, "Allahu Akbar" ("God is great").

An empty rocket pod lay next to the wreckage, raising questions about whether the helicopter was carrying aid.

But it's "possible the Russian helicopter was carrying both empty pods and aid, just as it is possible that the pods were empty because the rockets had been fired earlier in the flight," said Jeremy Binnie, IHS Jane's Defense Weekly Middle East and Africa editor.

Russia's air campaign in Syria is widely seen by Western leaders as an attempt to prop up the regime of Syrian President Bashar al-Assad.

No one has so far claimed responsibility for the downing, and Russia hasn't indicated who might be behind it.

The helicopter downing comes amid deadly fighting and a humanitarian crisis in eastern Aleppo, where rebels are trying to break a Syrian government siege.

Here's what's going on in Aleppo by numbers:

Some neighborhoods in Aleppo have been under fire for more than 80 consecutive days, leaving 6,000 people either dead or injured, according to the Syrian Observatory of Human Rights.

The UK-based monitoring group said rebel-held areas in the city's east have faced sustained attack by regime artillery and airstrikes, while rebel and Islamic factions have shelled regime-controlled areas in western neighborhoods.

The United Nations has warned of a potential humanitarian catastrophe as regime troops backed by Russian air power tighten their grip on the ruined city. It estimates that between 200,000 and 300,000 people remain trapped in the besieged eastern part of Aleppo.

For those left in the area, life is grim, CNN correspondent Ian Lee reports.

The siege has essentially cut the area off from vital supplies, and the shelves of once-bustling food markets are empty. Fuel is running low, and there is concern that ambulances will stop coming to people's aid and that hospital generators will have nothing to run on.

People are reusing medical supplies that should be disposable, such as syringes, CNN sources say.

The Syrian and Russian governments say three humanitarian corridors have been opened to allow for the distribution of badly needed food and medical aid to civilians and to provide residents -- along with rebels who choose to surrender -- the opportunity to leave. The Syrian regime and Russia say four more corridors will soon be made available.

The Russian military said that 169 civilians and 69 militants fled through the corridors over the weekend, the state-run Russian news agency Sputnik reported.

But CNN sources on the ground there say that the corridors are barely being used as an escape route.

They say they believe people are too scared to flee, fearing what the regime might do to them once they get out.

U.S. Secretary of State John Kerry suggested Friday that the corridor approach could potentially be a "ruse," telling reporters it carried "the risk ... of completely breaking apart the level of cooperation" between the United States and Russia.

Russia says it has prepared 14 tons of humanitarian cargo for those who leave the city, with 2.5 tons of food and other essentials already supplied.

Four hospitals and one blood bank were hit by airstrikes on the weekend of July 23 and 24, according to UNICEF.

It said a 2-day-old baby died in an incubator due to interruptions in the oxygen supply after airstrikes on a UNICEF-supported pediatric hospital.

It was the only such hospital in the city and was reportedly hit twice in less than 12 hours, UNICEF said.

"Attacks on health facilities are a blatant violation of international humanitarian law and can amount to war crimes," a UNICEF statement said. "Health facilities must never be attacked or damaged, and health workers should be allowed to provide medical treatment and services to all people in need wherever they are inside Syria."

A "cessation of hostilities" akin to a ceasefire went into effect nationwide February 27, but it has been repeatedly broken since then and seems to have collapsed completely with the Aleppo siege.

Widespread skepticism greeted Kerry's announcement of the so-called ceasefire earlier this year. The agreement included some rebel groups, but it never involved some of the most influential militants in Syria, such as ISIS and the former al Nusra Front.

The United Nations has called for a separate 48-hour ceasefire in Aleppo on humanitarian grounds to allow much-needed aid into the area, where malnutrition is rampant and medical supplies are dwindling.