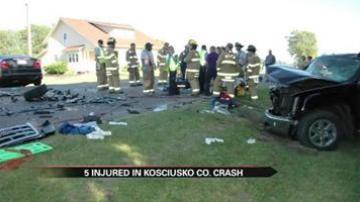 One of the drivers, 60-year-old John Etter, was found lying in the road. He was airlifted to Lutheran Hospital.

The driver of the other vehicle, Gary Spangle, suffered injuries to his lower leg/foot.

His passenger, Maxine Spangle, was seriously injured and flown to Lutheran Hospital.

Spangle's other two passengers, two teens, were taken to the hospital with shoulder and head injuries.

Gary Spangle attempted to miss Etter, but the two vehicles crashed head on.
Share this article: