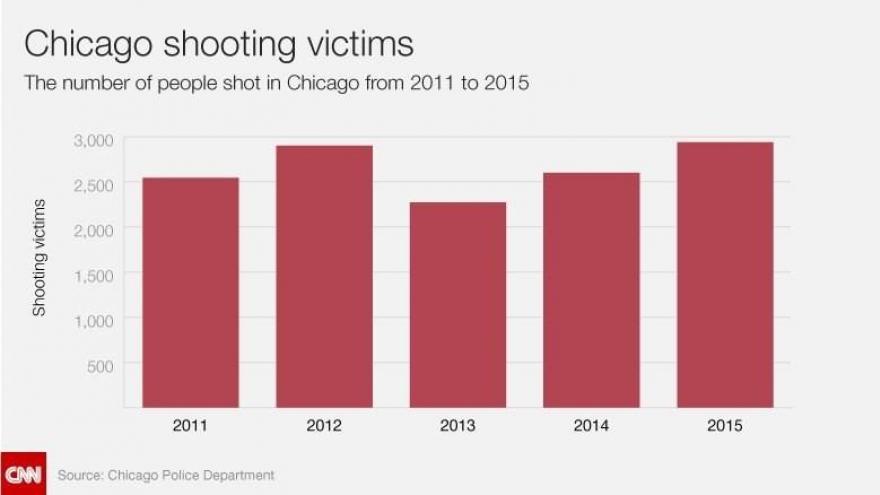 A visual guide by Amanda Wills and Sergio Hernandez

Chicago's 500th homicide of the year happened over Labor Day weekend, according to the Chicago Tribune.

That number carries a lot of weight for the city -- not just in quantity, but in meaning: 2016 is now the deadliest year in two decades.

CHICAGO VS. OTHER CITIES

When you compare Chicago's homicide rate to that of other big cities in the country -- New York and Los Angeles, for example -- it tops the list.

But Chicago is not the homicide capital of the United States.

New Orleans, St. Louis, Detroit, Baltimore and Newark all have higher rates when you drill down the data per capita.

However, this doesn't tell the entire story of Chicago's bloodshed. There's another statistic that points to a disturbing trend the city is facing: a surge.

In the early 2000s, the homicide rate in Chicago held steady, but it began an upward tick in 2014 and has been increasing ever since.

But 2016 is the deadliest year in two decades when it comes to homicide rates.

The day-to-day breakdown of those figures is alarming. For example, there were 12 murders on Father's Day weekend alone. The youngest victim was just 16.

A lot of the homicides in Chicago are gun-related. There are nearly 82 shootings per week. In just one weekend in August, there were eight gun-related homicides and 64 non-fatal shootings.

Chicago has strict gun laws, which is why many gun rights advocates point to it as evidence that tighter regulation doesn't equal less crime. But Chicago's gun violence problem is more complicated. Sixty percent of the guns used in shootings were purchased out of state.

Illinois Gov. Bruce Rauner recently signed a new gun control law that imposes harsher penalties on those who bring in guns from out of state to sell and do not have gun-owner ID cards.

The city's police department has been under review for months in the wake of high-profile officer-involved shootings, including that of Laquan McDonald.

An independent task force has accused the police department of institutional racism, saying officers "have no regard for the sanctity of life when it comes to people of color."

But the other side of this battle is the street crime in Chicago, which has led to the killing of innocent bystanders and kept residents shut inside their homes out of fear.

Englewood resident Stephanie Armas, 43, said she taught her kids from a very young age what to do when they hear gunshots.

Some Chicagoans partly blame the violence on economic struggles and lack of jobs. However, Chicago's unemployment rate fell from 6.1% in 2015 to 5.5% in 2016.

We often point to Chicago's alarming homicide numbers, but the real tragedy in this city are the victims and the families left behind.

They are the ones who face this violence every day, the ones who stand over gravestones, the ones who've lost hundreds of sons, daughters, brothers, sisters, mothers and fathers.

Here are a few Chicagoans we've met during our reporting:

Tre Bosley lost his brother, Terrell, when he was mistakenly shot by a gang member while helping a friend take drums into a church.

Englewood resident Stephanie Armas on what she has to tell her grandchildren some days when the streets are too violent, September 2016.

She added: "All mothers -- because we're all in some type of war zone, somewhere -- you have to teach (your children) to protect themselves."

Michael Gabb, whose grandson was killed near a park just blocks from his home, in March 2016.