6-Year-old takes car for a joyride 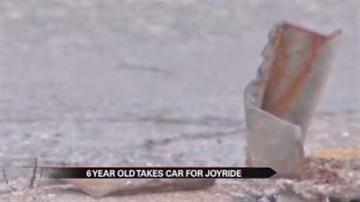 LAPEER, Mich. -- To the surprise of police and his family a six-year-old boy took his dad's car for a joyride.

It happened Saturday, in the small town of Lapeer, west of Flint.

Police say he got his hands on his dad's keys while he was sleeping.

He told police he was hungry and was on his way to get Chinese food.

It took several other drivers to get him to stop.