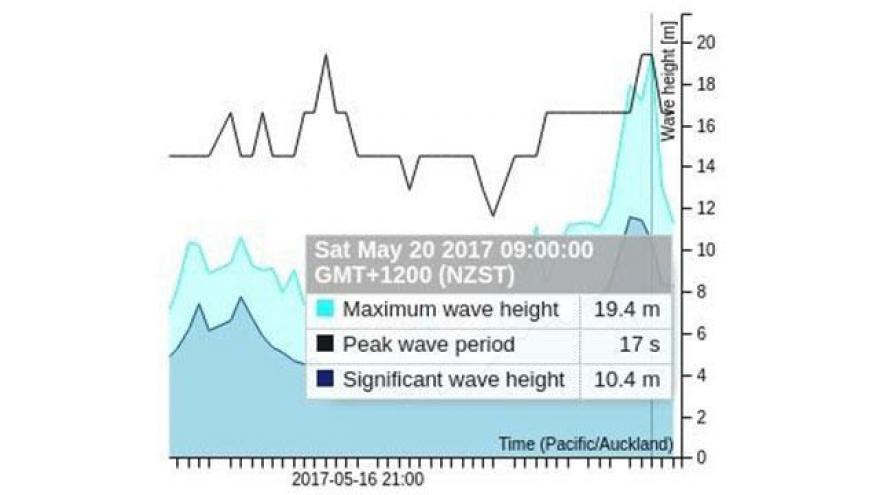 "This is one of the largest waves recorded in the Southern Hemisphere," said Dr. Tom Durrant, senior oceanographer at MetOcean Solutions, the company that deployed the buoy in conjunction with the New Zealand Defence Force.

Durrant said device was the "southern-most wave buoy moored in the open ocean."

Wave height is defined as the distance from the crest of one wave to the trough of the next, but the WMO defines significant wave height as "the average height of the highest one-third of the wave heights (sea and swell) occurring in a particular time period."

The biggest wave recorded by a buoy

Announcing the last record-breaking wave, the WMO said the significant wave height measurement "is comparable to what an observer would see as an average of about 15-20 well-formed waves over a period of about 10 minutes."

Saturday's Southern Ocean wave measurement was a "maximum wave height" -- the height of an individual wave rather than an average reflecting the sea state. The significant wave height during the time period measured was 10.4 meters (approximately 34 feet), according to MetOcean's blog.

So even though it was huge, the wave falls short of the largest ever recorded by a buoy. That honor goes to a wave recorded in the North Atlantic Ocean between Iceland and the UK on February 4, 2013, according to the WMO. Data captured from that buoy shows a maximum wave height of more than 25 meters (82 feet), with the significant wave height measuring 19 meters (62 feet).

Announcing the launch of the Southern Ocean buoy in February 2017, the New Zealand Defence Force said the device would study waves described by sailors as "liquid Himalayas."

Wave data collected over six months will be used to help design an offshore patrol vessel for the Royal New Zealand Navy, it said.

NZDF's Defence Technology Agency (DTA) worked on the project with MetOcean and the buoy was placed by the HMNZS Otago.

"Southern Ocean waves are described by sailors as 'liquid Himalayas' and remain largely unstudied, including our ability to forecast them. The wave buoy will characterize what waves are present, and this information will help us assess how well our forecasting models are predicting these waves," DTA researcher Sally Garrett said at the time.

MetOcean's Durrant said Saturday that the buoy had been performing "extremely well" since it was moored in place.

"Not only is it surviving these large waves, but it is making detailed recordings of extreme sea states in the Southern Ocean, a region rarely observed by in-situ instrument," he said. "During the depths of winter, Southern Ocean waves are enormous, with significant wave heights averaging over 5 meters, and regularly exceeding 10 meters. Individual waves can double that size."

MetOcean says the buoy runs on batteries and solar power and is expected to last six months.