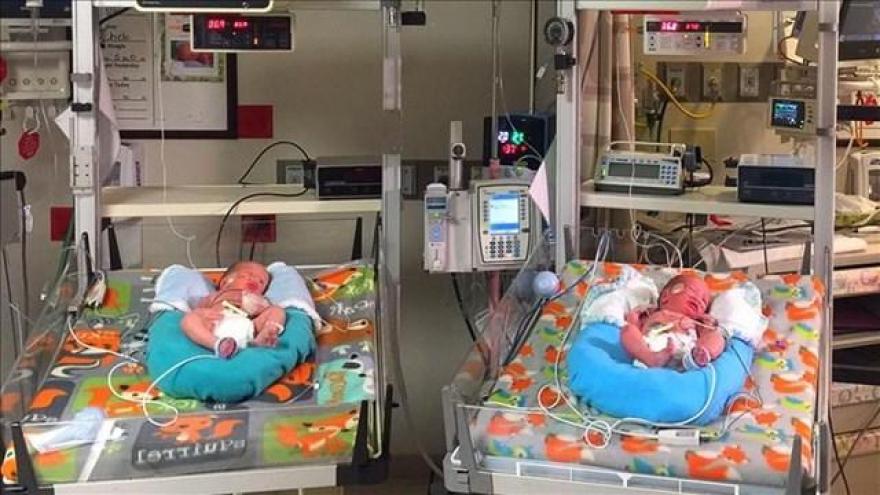 (CNN) -- No, this isn't ripped from the headlines of the National Enquirer. According to a hospital in Spain, a woman really did give birth to twins at the age of 64.

According to a news release from Hospital Recoletas Burgos, a hospital in Burgos, Spain, the sextagenarian gave birth via C-section to a boy and a girl, and all three patients are in perfect health.

The woman, who is being identified by her initials, had undergone IVF treatment in the United States before returning to Spain.

Recoletas says this isn't the first time the woman has given birth there. Six years ago, she had her first child at the hospital at the tender, fecund age of 58.

Fertility over 50 is a rare but clearly not impossible feat. Data from the Centers for Disease Control and Prevention (PDF) show that 600 babies were born to women between 50 and 54 years old in 2012. By comparison, there were only 144 such births in 1997.

Celebrities like Janet Jackson are also increasing the visibility of later-in-life pregnancies. Jackson gave birth to her first child in January at the age of 50.

Still, even though fertility treatments have changed the game for older moms, experts say there are risks, both for the birth and for the difficulties of motherhood that follow.

"What never gets picked up in these stories ... is there's a lot of women doing this stuff that doesn't work for them. They don't get pregnant, or they miscarry, or God forbid, they have a disabled child, and now they're maybe 50, 55, and they've got to deal with it," Sauer said. "They have to be prepared for that."