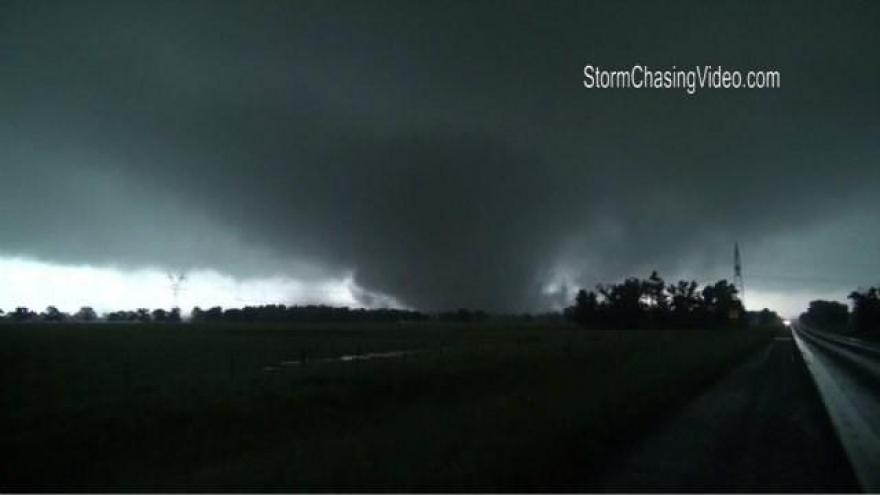 The body of a 72-year-old woman was recovered in southwestern Missouri after flood waters washed away her car, authorities said.

Another woman died Saturday after a tree fell on her mobile home in De Witt, Arkansas, about 80 miles east of Little Rock, according to police.

Millions have been under flash flood watches and warnings as the storm moves over the southwest and Midwest states since Friday.

Rainfall amounts of 4-6 inches have been reported in Missouri and Texas, with some areas seeing up to 9 inches, the National Weather Service said.

Hundreds of evacuations were underway due to the flooding and mass destruction left by the tornadoes.

A couple was left stranded in their car when flood waters began to rise in Christian County, officials said.

Despite the husband's efforts to rescue his wife, their car was swept away with the 72-year-old woman inside.

The woman's body was found Saturday in a field near Clever, MO.

At least 150 roads, mostly in southern Missouri, were closed by flooding, the Missouri Department of Transportation said.

"Our standing first responders are working to protect life and property in this storm. Grateful for their work. Stay home. Stay safe," he wrote on Twitter.

At least three tornadoes touched down east of Dallas as severe storms moved through the area, the National Weather Service said.

The storm struck around 7:20 p.m. ET and produced considerable damage about 60 miles east of Dallas in Van Zandt and Henderson counties, according to the National Weather Service.

At least 55 patients were transported to ETMC Regional Healthcare System from the tornadoes, hospital spokeswoman Rebecca Berkley said. One was in critical condition and the other patients' injuries were not life-threatening.

Multiple ambulances were at the site of the tornadoes while the search and rescue of victims continues, Berkley said.

A team will survey the damage on Sunday to determine the intensity of the tornadoes.