70 officers escort slain officer's son as he returns to school 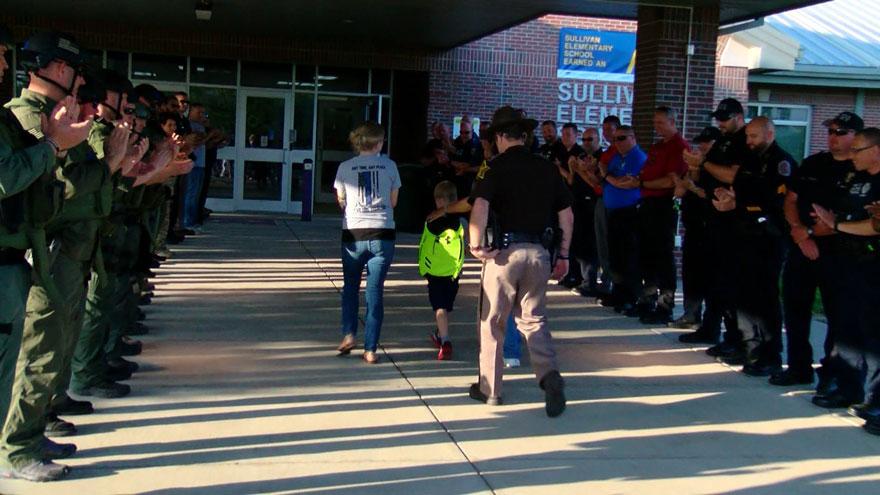 It was his first day back to class since his police officer dad was killed in the line of duty.

So, Dakota asked his mom whether one of his dad's fellow police officers could escort him to Sullivan Elementary School in western Indiana.

He's unlikely to forget what he saw as he walked up to the school building Monday.

Some 70 police officers showed up, standing in support as he walked in -- wearing a yellow backpack and his dad's police badge around the neck.

The officers weren't just from Terre Haute, where Dakota's dad Rob Pitts was an officer.

They came from other departments as well.

"Welcome back to school, bud," one of them greeted him.

"Dakota asked his mom if one of his dad's friends could take him to school so she reached out to Rob's friends and families," Les Hamm, a detective with Terre Haute police department told CNN affiliate WTHI TV.

SWAT officers also presented Dakota with his own SWAT shirt and badge.

"He will definitely know his dad was a hero," Pitts' sister Kelli Jones told the affiliate. "Blood doesn't always make family and I think the blue family went above and beyond."

Sullivan Elementary Principal Samantha Phegley told CNN the school wanted to facilitate Dakota's return to school as much as possible.

"A student's return to school after the death of a loved one, especially a parent, is difficult," she told CNN. "Having the support of Rob's police family helped Dakota take those first few steps."

Rob Pitts, a veteran of Terre Haute police department, was shot and killed as he responded to a call at an apartment complex on May 4.