77-Year-old defends his house against burglar 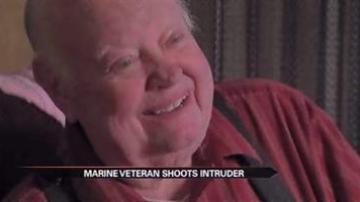 The 77-year-old was watching TV when he heard a strange knock on the door.

He immediately went and got his gun and by the time he got back the bad guy was trying to break down his door.

"I shot through the door. He went a hollering and screaming, and I could hear him going clear down the street, hollering," said Lloyd MaCarty. "I'm just like my signs on my storm door say, 'I'm proud to be American,' I just felt I was protecting my wife and I by shooting."

While all this was going on his wife called the police.

Officers found the suspect nearby with a gun shot to his stomach.