8-Year-old takes family van for ride, ends up in ditch 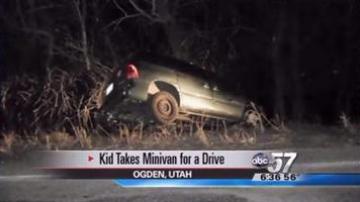 Utah Police say an 8-year-old boy with his little sister in tow, made a late night run to the store.

The minivan he was driving veered off the road, and hit some trees.

Police say they're lucky it stopped there, because there's a river not too far from where they landed.

The boy and his 5-year-old sister weren't hurt in the wreck.

The parents didn't even know they were gone until they got the call from Utah Police.