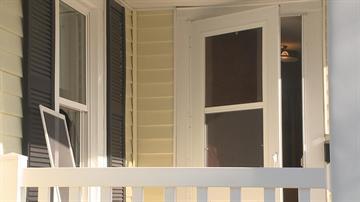 “I seen the police cars outside, seen them go up to the door and I said to my son, I bet she’s been murdered,” Dolores Richardson said.

Richardson lives right across the street from Hickey’s home; she said the two had become friends over the years. “She was as a wonderful person, everyone around here liked her,” Richardson said. “She was always out in the yard working; you’d think she was 30-40 years old.”

But no one had seen the elderly woman in about four days, when the newspapers started to pile up outside her front door, a neighbor called police.

When officers got out to the house around 9 a.m. they notices a window at the front of the home had been broken out, inside Hickey was found dead on the floor. Investigators said the woman had been dead for several days.

The official cause of death has not been released, but sources at the scene told ABC57 News Hickey was stabbed and beaten to death.

Police suspect the woman was killed during a home invasion. Investigators said Hickey’s car, a 2002 gold Saturn was missing from her garage, but would not comment if anything else was taken from the home.

“Whoever had done this had to have known that she lived alone and what kind of car she had and probably felt she was an easy target,” Richardson said.

Police located the victim’s car on the 500 block of South 24th Street in South Bend, but no arrests have been made and investigators have not named any suspects.

Metro Homicide left the murder scene just before 7 p.m. on Thursday and the investigation is ongoing.