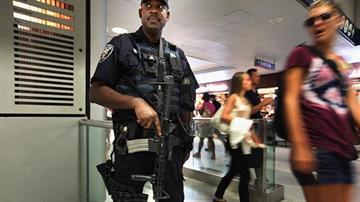 On the tenth anniversary of the Sept. 11, 2011, terror attacks, the U.S. intelligence and law enforcement apparatus continued a feverish, around-the-clock effort to find evidence to corroborate an unfolding terror plot. By as or early Sunday morning, none was in hand.

However, the picture authorities were working from had been fleshed out substantially since the intelligence from Afghanistan arrived Wednesday.

Authorities now believe, like several self-radicalized American jihadists before them, that the Sept. 11 anniversary plotters journey to jihad began in the U.S., took them to the Afghanistan-Pakistan region in July and had them, according to the CIA informant whose information is the hard bottom of the case, return to the U.S. on Aug. 31 or Sept. 1 to carry out an anniversary bomb plot.

So far, no new intelligence has come in to support or discount the informant account coming in from overseas. The process of elimination has been a grueling one for analysts and law officers working around the clock.

Since last Thursday authorities have feverishly scrubbed communications and travel manifests using a series of computer search formulas to reduce the pool of possible candidates for investigation from several hundred names, to a much narrower group, according to law enforcement and intelligence sources.

Now the FBI JTTF has fanned out its resources -- which include those of numerous other agencies -- across the country to find, interview and eliminate people from the pool of potential suspects.

Here is how that process works according to authoritative sources who spoke to ABC News' Pierre Thomas:

The pool of names was culled from hundreds men who flew into the U.S. from south Asia in August. That list was developed by running names through all terror watchlists and intelligence files available to the U.S. government.

In sifting and narrowing the names, authorities also used a formula that included the ages of potential cell members -- the informant said they would be in their 30s or 40s -- date of travel, and multiple travel routes to and from the Afghan-Pakistan region.

From among that group, multiple authorities have told ABC News that two identities are of particular interest and appear possible members of the plot.

But whether the credible information that there is a plot is ultimately proven or disproved depends on whether an informant's information, gleaned second hand from conversation in a house in Afghanistan, can be verified.

The specific travel time frame information comes from the same CIA informant who said three people were dispatched by al Qaeda to carry out a bomb plot in either New York or Washington.

Despite the secondhand nature of the source, the high quality of the information led authorities to deem the threat credible, if uncorroborated, and triggered the massive rapid police response in Washington and New York, and the all-hands intelligence community and law enforcement manhunt.

"What's striking about this particular information is its clarity," a senior official told ABC News. "Usually intelligence comes in bits and pieces and officials have to connect dots. Here, I'm told, there were no dots to connect, there was so much detail in one place at one time. It was all laid out. If it's a plot it is well-planned and there's an intention to go forward with it. If it turns out not to be real then it's definitely not. There is no middle ground."

As American begin to recognize the 9/11 anniversary today, officials say they have no choice but to act as if the threat is real and the clock is ticking.

"Al Qaeda again is seeking to harm Americans and in particular to target New York and Washington," said Secretary of State Hillary Clinton in New York Friday. "We are taking this threat seriously. Federal, state and local authorities are taking all steps to address it."

Today NYPD police commissioner Ray Kelly told ABC News' New York affiliate WABC there was no new information on the potential terror plot, but said there was also "no reason to lessen our alert status."