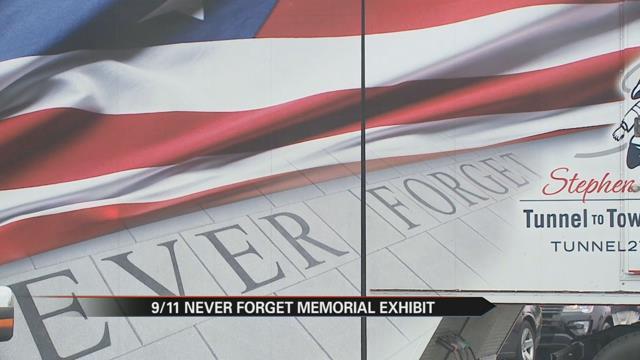 In just a few days, the country will come together to honor the lives of those who died on September 11, 2001.

On Tuesday, a one of a kind 9/11 exhibit made its way to Michigan City.

The exhibit was part of a massive first responder escort that ended at Blue Chip Casino.

Beginning Wednesday, anyone, any age, can visit the interactive educational exhibit that will be staged in the front parking lot of Blue Chip Casino.

The 53-foot tractor unfolds into a 1000-square-foot exhibit that features artifacts like steel beams from the twin towers, documentary videos, and recordings of first responder radio transmissions.

The exhibit is staffed by volunteer New York firefighters and is named in honor of Stephen Siller, a New York Firefighter, who gave his life saving and helping others on 9/11.

“It is surreal, because even though we weren’t there, the world felt the same million emotions, know one felt anything different, that moment we all felt the same thing, it was just pain you know,” said Constance Bentley, a Michigan City resident.

On Wednesday, the exhibit opens at noon and will be at Blue Chip until September 5th.

Admission is free and all ages are welcome.