9 Injured at a California Walmart 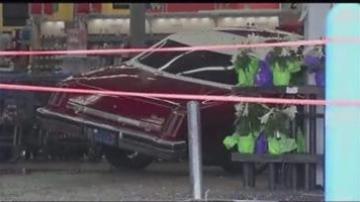 SAN JOSE, Calif. — At least nine people are hurt after a man drove through a Walmart and began assaulting customers.

Officers say the the man made it about 30 feet in and then hopped out of his car and began to beat people.

He had something in his hand he used to hit them.

Witnesses say some customers were able to grab him and tie him up.

The man has been arrested. His name has not been released.