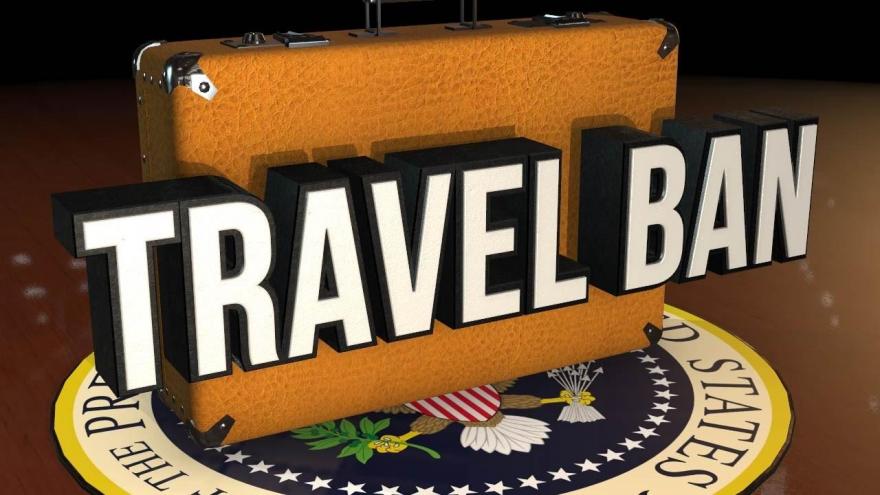 (CNN) -- For the second time in President Donald Trump's young administration, the 9th US Circuit Court of Appeals is pressing the Justice Department to explain the legality of his travel ban, with Trump's record of campaign calls to ban Muslims from entering the US taking center stage.

Questions from each of the three judges on the panel -- all Bill Clinton appointees -- have touched on exactly when the court might be allowed to look behind the text of the President's travel ban to find a discriminatory purpose.

Yet acting Solicitor General Jeffrey Wall, arguing on behalf of the Trump administration, urged the judges not to delve into a "wide ranging inquiry into subjective motivation" in considering Trump's past comments on Muslims.

Neal Katyal, arguing on behalf of the plaintiffs, countered that they are not in favor of "psychoanalysis" or trying to get in President's head, but suggested "this is a repeated pattern of the President."

"Does that mean the President is forever barred from issuing an executive order along these lines?" Judge Richard Paez asked.

Katyal said no, and pointed out that the President has never disavowed his past statements and instead went on CNN in 2016 and said "Islam hates us."

Two months ago, a federal judge in Hawaii halted the core portions of Trump's revised travel ban just hours before it was slated to go into effect nationwide, finding it likely violated the Constitution by disfavoring Muslims.

Trump immediately slammed the decision as "an unprecedented judicial overreach" and later tweeted about his frustrations with the West Coast-based 9th Circuit over an unrelated case.

Déjà vu for the 9th Circuit?

This isn't the first time the 9th Circuit has been tasked with deciding the immediate fate of the President's travel ban.

In February, a federal judge in Seattle halted the original travel ban nationwide, and a three-judge panel on the 9th Circuit declined to reinstate it -- unanimously unpersuaded by the Trump administration's national security arguments and doubting travelers had been given adequate "due process," such as "notice and a hearing prior to restricting an individual's ability to travel."

As a result, the Trump administration went back to the drawing board, drafting a revised executive order in March that provided advance notice to travelers and exempting foreigners with valid visas, admittedly in the hopes of addressing the "judicial concerns" posed by the original order.

Yet Trump's continued inclusion of a 90-day ban on all foreign nationals from six Muslim-majority countries and the 120-day ban on all refugees in the revised travel ban led to fresh legal challenges from the state of Hawaii and an American imam that a new panel of 9th Circuit judges must now resolve.

But unlike the due process concerns driving the analysis in the last round, this time the appeals court must squarely wrestle with Trump's past statements about Muslims as it decides whether the lower court in Hawaii correctly blocked the revised ban.

The Justice Department maintains that the travel ban was animated by bona fide national security concerns, but US District Court Judge Derrick Watson disagreed in March, concluding that the executive order was likely motivated by a discriminatory purpose.

"A review of the historical background here makes plain why the Government wishes to focus on the executive order's text, rather than its context," Watson wrote. "The record before this court is unique. It includes significant and unrebutted evidence of religious animus driving the promulgation of the executive order and its related predecessor."

"For instance, there is nothing 'veiled' about this press release: 'Donald J. Trump is calling for a total and complete shutdown of Muslims entering the United States,'" Watson added. "These plainly-worded statements, made in the months leading up to and contemporaneous with the signing of the executive order, and, in many cases, made by the executive himself, betray the executive order's stated secular purpose."

The Justice Department separately appealed a different federal judge's decision to halt the 90-day travel ban to the 4th US Circuit Court of Appeals. The court heard arguments for two hours last week, but no word yet on when it might rule.

In the event the two appellate courts reach different results, the travel ban will not go back into effect as long as one court's nationwide injunction remains in effect. But experts say such a scenario undoubtedly puts the case on track for review by the US Supreme Court.

"There's no guarantee that the 13 4th Circuit judges who heard argument last week will hand down their ruling before the three 9th Circuit judges hearing Monday's argument will," said Steve Vladeck, CNN legal analyst and professor of law at the University of Texas School of Law. "The real question, though, isn't the timing, but whether the two courts come out the same way. This issue may be bound for the Supreme Court no matter what, but it will certainly be heard by the justices if these lower courts disagree."

"No matter how the two courts rule, I predict this case will go to the Supreme Court," agreed Cornell Law School professor Stephen Yale-Loehr. "The issue is too important for the Supreme Court to pass up."