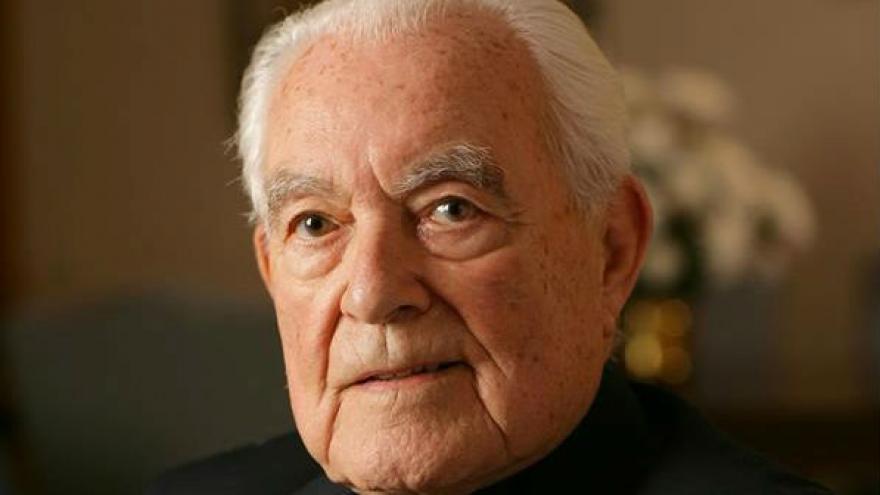 "I never could have dreamed that first day of class what lay ahead, but that's just as good," said Hesburgh in a prior interview.

Hesburgh arrived to Notre Dame at age 17. He studied there for three years.

Nine years later, on that same campus, he was ordained a Holy Cross priest.

His true journey under the Golden Dome started in 1945 when he served as a chaplain to World War II veterans and taught religion classes.

In 1949 Hesburgh was appointed Executive Vice President of the university.

"That was a big jump, and I had never been in administration before and suddenly I'm the number two guy in the university."

He began overseeing the athletic department. He decided the football team should fly instead of taking a train to away games to cut down on the players' time away from campus.

"The first trip I got to fly the airplane on the way back which was kind of a dumb thing to do. I'm kind of an aviation nut and I always enjoyed flying. Think of the headline: Notre Dame Team Wiped Out With Hesburgh at the Helm.”

In his lifetime, he answered calls from the Pope, became the first priest to become a US Ambassador and received the Presidential Medal of Freedom, the highest honor bestowed.

In 1962, he was featured on the cover of Time Magazine.

Hesburgh was a great champion of civil rights. He served on the Civil Rights Commission for 15 years.

Hesburgh not only fought for civil rights across the nation, but at home.

In 1967, Hesburgh called for greater diversity in the university's workforce.

Four years later, the number of minority employees increased from 45 to 345.

You also have Hesburgh to thank for post season games.

In 1970 he insisted the university end its 40-year absence in post season bowl games.

That year, the proceeds from the cotton bowl were used to fund minority scholarships.

Hesburgh also helped 365 women enroll at the university, for the first time, in the fall of 1972.

After 35 years as the head of the university, President Father Theodore Hesburgh stepped down from the job.

He arrived on campus a teenager and stayed for most of his life.

Here is the release from the university

Rev. Theodore M. Hesburgh, C.S.C., president of the University of Notre Dame from 1952 to 1987, a priest of the Congregation of Holy Cross and one of the nation's most influential figures in higher education, the Catholic Church and national and international affairs, died at 11:30 p.m. Thursday (Feb. 26) at Holy Cross House adjacent to the University. He was 97.

“We mourn today a great man and faithful priest who transformed the University of Notre Dame and touched the lives of many,” said Rev. John I. Jenkins, C.S.C., Notre Dame's president. “With his leadership, charisma and vision, he turned a relatively small Catholic college known for football into one of the nation's great institutions for higher learning.

“In his historic service to the nation, the Church and the world, he was a steadfast champion for human rights, the cause of peace and care for the poor.

“Perhaps his greatest influence, though, was on the lives of generations of Notre Dame students, whom he taught, counseled and befriended.

“Although saddened by his loss, I cherish the memory of a mentor, friend and brother in Holy Cross and am consoled that he is now at peace with the God he served so well.”

In accord with Father Hesburgh's wishes, a customary Holy Cross funeral Mass will be celebrated in the Basilica of the Sacred Heart at Notre Dame in coming days for his family, Holy Cross religious, University Trustees, administrators and select advisory council members, faculty, staff and students. In lieu of flowers, contributions can be made to the Father Ted Hesburgh, C.S.C., Fund for Excellence in Catholic Education at Notre Dame or to the Congregation of Holy Cross.

A University tribute to Father Hesburgh will take place in Purcell Pavilion at the Joyce Center on Wednesday.

Father Hesburgh was born May 25, 1917, in Syracuse, New York, the son of Anne Murphy Hesburgh and Theodore Bernard Hesburgh, an executive of the Pittsburgh Plate Glass Co. A brother, James, was graduated from Notre Dame in 1955 and lives in South Bend, Indiana.

Three sisters preceded him in death.

Father Hesburgh was educated at Notre Dame and the Gregorian University in Rome, from which he received a bachelor of philosophy degree in 1939. He was ordained a priest of the Congregation of Holy Cross in Sacred Heart Church (now Basilica) on the Notre Dame campus June 24, 1943, by Bishop John F. Noll of Fort Wayne, Indiana. Following his ordination, Father Hesburgh continued his study of sacred theology at the Catholic University of America in Washington, D.C., receiving his doctorate (S.T.D.) in 1945. He joined the Notre Dame faculty the same year and served as chaplain to World War II veterans on campus in addition to his teaching duties in the Religion Department. He was appointed the head of that department in 1948, and the following year was appointed executive vice president in the administration of Rev. John J. Cavanaugh, C.S.C., the University's president. At the age of 35 in June 1952, he was named the 15th president of Notre Dame.

The accomplishments of the Hesburgh era at Notre Dame are reflected in statistics comparing the Notre Dame of 1952, when Father Hesburgh became president, with the University he left in 1987. The annual operating budget went from $9.7 million to $176.6 million, the endowment from $9 million to $350 million, and research funding from $735,000 to $15 million. Enrollment increased from 4,979 to 9,600, faculty from 389 to 950, and degrees awarded annually from 1,212 to 2,500. The two major changes during the Hesburgh era were the transference of governance in 1967 from the Congregation of Holy Cross to a two-tiered, mixed board of lay and religious trustees and fellows, and the admission of women to the undergraduate program in 1972.

Father Hesburgh played an active and influential role in national and international affairs during and after his presidency.

He held 16 presidential appointments over the years and they involved him in virtually all major social issues — civil rights, peaceful uses of atomic energy, campus unrest, treatment of Vietnam draft evaders, and Third World development and immigration reform, to name only a few.

Justice was the focus of many of his outside involvements. He was a charter member of the U.S. Commission on Civil Rights, created in 1957, and he chaired the commission from 1969 to 1972, when President Richard Nixon replaced him as chairman because of his criticism of the administration's civil rights record. Father Hesburgh was a member of President Gerald Ford's Presidential Clemency Board, charged with deciding the fate of various groups of Vietnam offenders. His work on these commissions led to the creation at Notre Dame Law School of the Center for Civil and Human Rights.

In 1971 he joined the board of the Overseas Development Council, a private organization supporting interests of the underdeveloped world, and chaired it until 1982. During this time, he led fundraising efforts that averted mass starvation in Cambodia in 1979-80. Between 1979 and 1981 he also chaired the Select Commission on Immigration and Refugee Policy, the recommendations of which became the basis of Congressional reform legislation five years later. He was involved during the 1980s in a private initiative that sought to unite internationally known scientists and world religious leaders in condemning nuclear weapons. He helped organize a 1982 meeting in Vatican City of 58 world-class scientists, from East as well as West, who called for the elimination of nuclear weapons and subsequently brought together in Vienna leaders of six faith traditions who endorsed the view of these scientists. His global perspective was the impetus for the establishment at Notre Dame of the Kellogg Institute for International Studies and the Kroc Institute for International Peace Studies.

Father Hesburgh also served four Popes, three as permanent Vatican City representative to the International Atomic Energy Agency in Vienna from 1956 to 1970. At the request of Pope Paul VI, he built in 1972 the Ecumenical Institute at Tantur, Jerusalem, which Notre Dame continues to operate. Paul VI also appointed him head of the Vatican representatives attending the 20th anniversary of the United Nations' human rights declaration in Teheran, Iran, in 1968, and six years later a member of the Holy See's U.N. delegation. In 1983 Father Hesburgh was appointed by Pope John Paul II to the Pontifical Council for Culture, charged with finding ways in which the saving message of the Gospel could be preached effectively in the world's variegated cultures.

On more than one occasion, Father Hesburgh found himself the first Catholic priest to serve in a given position. Such was the case during the years he was a director of the Chase Manhattan Bank and a trustee (later, chairman) of the Rockefeller Foundation. Also, his appointment as ambassador to the 1979 U.N. Conference on Science and Technology for Development was the first time a priest had served in a formal diplomatic role for the U.S. government.

Father Hesburgh also was a national leader in the field of education, serving on many commissions and study groups. Within the academy, he served as chairman of the International Federation of Catholic Universities from 1963 to 1970 and led a movement to redefine the nature and mission of the contemporary Catholic university, drawing heavily on the experience of Catholic institutions of higher learning in the United States. His stature as an elder statesman in American higher education is reflected in his 150 honorary degrees, which is believed to be the most ever awarded to one person. He was the first priest elected to the Board of Overseers at Harvard University and served two years (1994-95) as president of the board. Father Hesburgh also co-chaired from 1990 to 2003 the Knight Commission on Intercollegiate Athletics, an influential advocate for reforms in college sports.

In addition to the honorary degrees, Father Hesburgh also was recognized at the nation's highest levels for his many contributions to society. In July 2000, his public service career was honored when he became the first person from higher education to be awarded the Congressional Gold Medal. Leadership of the Senate and House of Representatives gathered in the rotunda of the Capitol as President Bill Clinton presented the medal.Father Hesburgh also received the Medal of Freedom, the nation's highest civilian honor, from President Lyndon Johnson in 1964. He also received numerous awards from education groups, among them the prestigious Meiklejohn Award of the American Association of University Professors in 1970. This award, which honors those who uphold academic freedom, recognized Father Hesburgh's crucial role in blunting the attempt of the Nixon administration in 1969 to use federal troops to quell campus disturbances.

When Father Hesburgh stepped down as Notre Dame's leader June 1, 1987, it ended the longest tenure at that time among active presidents of American colleges and universities. After a yearlong sabbatical, he returned to a retirement office on the 13th floor of the newly named Hesburgh Library. One of his first projects was completion of an autobiography, “God, Country, Notre Dame,” which was published in November 1990 by Doubleday and became a national best-seller.

In addition to his biography, Father Hesburgh wrote three other books — “The Humane Imperative: A Challenge for the Year 2000,” published in 1974 by the Yale University Press; “The Hesburgh Papers: Higher Values in Higher Education,” published in 1979 by Andrews McMeel Inc.; and “Travels with Ted and Ned,” published in 1992 by Doubleday.

A consistent theme in these and other writings is a vision of the contemporary Catholic university as touching the moral as well as the intellectual dimensions of scholarly inquiry.

“The Catholic university should be a place,” he wrote, “where all the great questions are asked, where an exciting conversation is continually in progress, where the mind constantly grows as the values and powers of intelligence and wisdom are cherished and exercised in full freedom.”

That the Notre Dame of today, in reflection of that vision, stands as one of the world's great universities is the lasting legacy of Rev. Theodore M. Hesburgh, C.S.C.