A generation raised on gun violence sends a loud message to adults: Enough 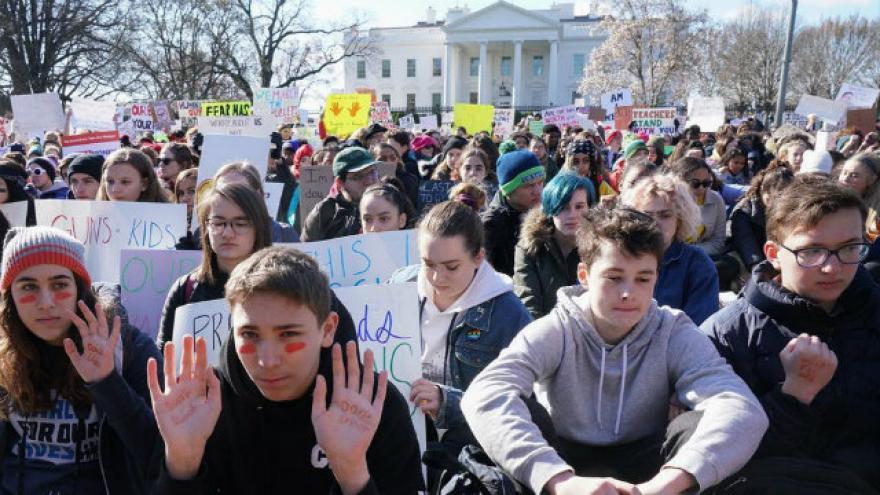 Students sat in silence for 17 minutes with their backs turned to the White House on Wednesday to show support for Marjory Stoneman Douglas High School shooting victims and to protest gun violence. Photo courtesy Victoria Pickering/Instagram 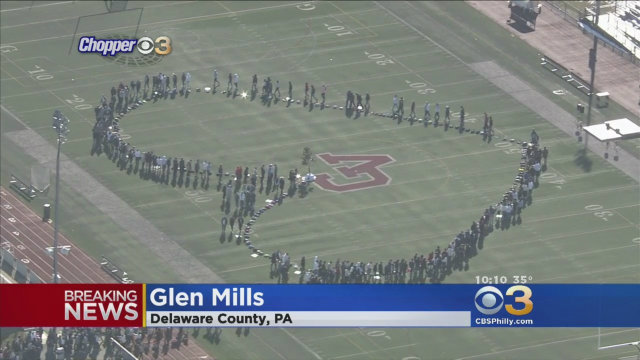 Students at Garnet Valley High School in Delaware County, Pennsylvania showed their support by displaying 232 backpacks in a heart shape on the football field. KYW

By Emanuella Grinberg and Holly Yan

(CNN) -- Thousands of students across the United States walked out of class Wednesday to demand stricter gun laws in a historic show of political solidarity that was part tribute and part protest.

From Maine to California, the 17-minute walkout -- one minute for each of the 17 people killed at Florida's Marjory Stoneman Douglas High School one month ago -- began around 10 a.m. in each time zone.

Some participants read the names of each victim; others stood in silence around sets of empty chairs. At Granada Hills Charter High School in Los Angeles, students lay down on a football field to spell out the walkout's rallying cry: "Enough."

The demonstrations continued throughout the day in numerous cities. Participants waved signs and chanted enough as th 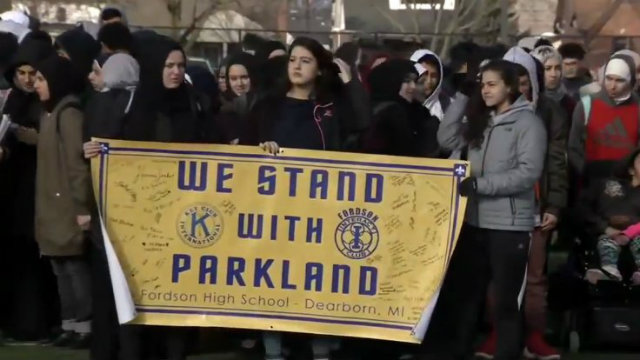 The walkout is considered both a memorial for school shooting victims and a protest for action on gun control. Students from Detroit, Michigan joined the walkouts. WDIV
ey marched through the streets and rallied in front of government buildings, including the White House.

They called on lawmakers to do something before another school falls victim to gun violence.

"This is not a matter of left versus right. This is a matter of public safety," said Cate Whitman, a junior at LaGuardia High School in New York. "We're all working together, which is something we haven't seen from the adults in a very long time."

In Parkland, Florida, Stoneman Douglas students rose before sunrise to place hundreds of pinwheels around campus to mark the anniversary. A quote from the environmentalist for whom the school is named hung on a sign near the school, telling students to "be a nuisance when it counts."

Stoneman Douglas students hadn't planned to do anything more than walk out of class for 17 minutes, as many of them are preparing for a March 24 rally in Washington. But as crowds swelled across the country, some students made a spontaneous decision to continue rallying off campus after the walkout.

"By more than one school doing this, it shows politicians and lawmakers that we want change to happen," senior Audrey Diaz said. "And the next generation is prepared to make that happen." 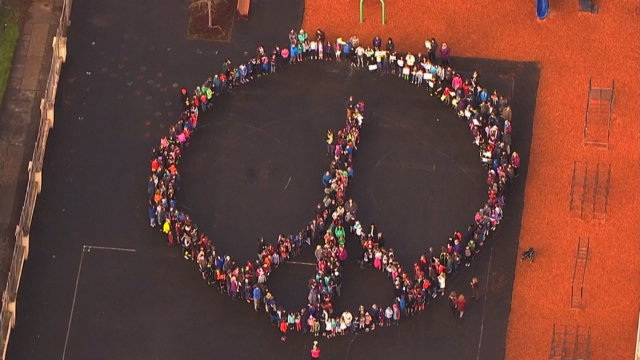 Parkland survivors and their families did not see the first two demands gain traction in the Florida legislature. But it passed other measures that Gov. Rick Scott signed into law, including one that allows some teachers to be armed.

Student organizers behind the day of action said they feared that introducing more guns or police into schools could turn schools into prisons, with dangerous consequences for students of color.

"We are standing in solidarity with the youth from the mass shooting, but we also know the repercussions of what's going to happen next could fall on black and brown people," said Keno Walker, who helped local high school students organize walkouts in Miami.

Jackson Mittleman of Newtown, Connecticut, said he took heart in how the Parkland families were able to agitate for change, even though he does not agree with of all the legislation.

"The voice of the people is so strong now," said Jackson, co-chair of the Jr. Newtown Action Alliance, who organized the walkout at Newtown High School. "We are motivated and we are fired up to push as hard as they push and fight as long as they fight."

While students marched, the US House of Representatives passed a bill to fund heightened security at schools. The bill had bipartisan support, but many Democrats were frustrated that it didn't include any gun control measures. Meanwhile, in Illinois, the state Senate passed a bill that raises the legal age to buy assault weapons to 21.

Some students chose not to walk out with their classmates.

Austin Roth, a senior at Lapeer High School in Michigan, said he's "100% supportive" of those who marched to honor victims of gun violence.

"However, I am not supportive of those who use a tragic event to push their political agendas, such as gun control," he said.

The 17-year-old said he supports federal background checks and is "not completely against" raising the age to buy firearms. But he said he strongly disagrees with the notion of banning assault rifles, arguing they can be useful when confronted with multiple criminals.

In Minnesota, 16-year-old Noah Borba said he didn't walk out because he doesn't fully support the movement. He said he supports a ban on assault rifles, but he did not think it was logistically "realistic" to get rid of the assault rifles already out there.

"Because I have yet to have heard many good ideas, the movement seems too vague for my liking, and I would not like to associate myself with something I could end up disagreeing with in the future," said the Buffalo High School sophomore.

Disciplinary threats for walking out

Some students walked out in defiance of school districts who threatened to punish participants.

In the Atlanta suburb of Cobb County, the school district said it would take disciplinary action against students who walked out, citing safety concerns. The punishment could range from Saturday school to five days' suspension, per district guidelines.

That deterred some students, but not all of them, Pope High School senior Kara Litwin said.

"Change never happens without backlash," she said. "This is a movement, this is not simply a moment, and this is only the first step in our long process."

High school students in Littleton, Colorado, were born after the 1999 Columbine High School shooting that put their town in the history books. But the tragedy has shaped their lives.

Sam Craig grew up with school lockdown drills performed in the name of Columbine. Each year, the town comes together on the anniversary for a day of service, he said. But the Chatfield Senior High school student said the community is stronger because of the shooting.

"We try to find that balance to make our community more connected and loving," said Craig, who organized the walkout at his school.

Yet 19 years after the shooting, "we still have not seen enough change," Columbine High School junior Abigail Orton said Wednesday.

Students from Columbine, Chatfield Senior High and Dakota Ridge walked out Wednesday in honor of Parkland students. Later in the evening, they reconvened for a rally in nearby Arvada.

Another Columbine student lamented that her school is forever linked to tragedy when so much good comes from the school today. And as the Parkland shooting shows, politicians have not done enough to prevent mass tragedies, 16-year-old Rachel Hill said.

"This could happen to us at any time," she said. "We don't need comfort anymore. ... We need to change the way things are done all over the country."