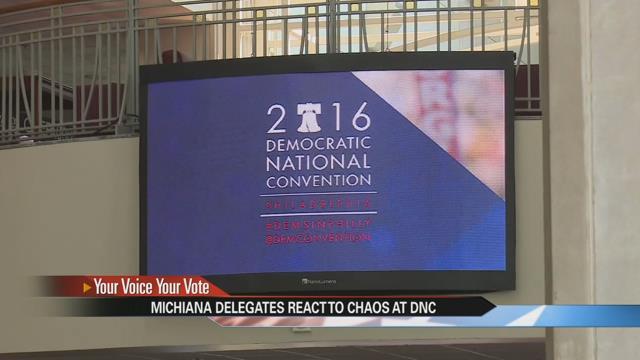 Michiana Delegates are anticipating Bernie Sanders speech on Monday Night. A number of local delegates are in Philadelphia this week for the Democratic National Convention.

“I’m really anxious to hear how he is moving forward at this point because now it’s about where is the Democratic party going to go,” says Tony Flora a Bernie Sanders Delegate from South Bend.

Tonight Flora has high hopes Sander’s speech will touch on issues that affect many in Michiana.

In 2016 the Democratic National Convention is aiming for party unity.

But this weekend the now former head of the DNC Debbie Wasserman Schultz is in boiling water after emails were leaked.

The emails showed favoritism towards Clinton during the campaign.

Bernie Sanders has already officially endorsed Hillary Clinton but the scandal is making it hard for some to support his endorsement.

Flora says he is looking forward and anticipates Sanders plan for the future.

Flora adds Sanders may not be the presidential nominee but still has influence.

Sander’s plans for free higher education, higher minimum wage are all on the Democratic Party’s platform.

“That’s I think what Bernie’s done  for the country for the democratic party is to really put it on the pathway to really standing up for middle class people,” says Flora.