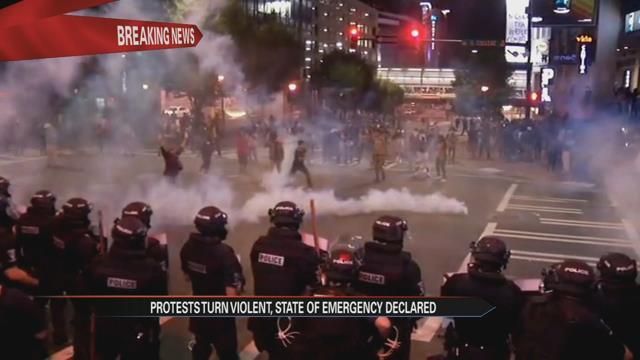 Charlotte saw another round of violent protests Wednesday night after the police killing of an African-American man, resulting in 4 police officers injured and a civilian in critical condition, placed on life support.

City officials and reporters on scene say this was a civilian-on-civilian shooting. Some protesters are saying it was a cop who fired the shot.

A state of emergency has been declared in Charlotte. And the clean up is on.

A downtown hotel was damaged, and the team store for the Charlotte Hornets had its windows shattered. Other businesses have been damaged or vandalized.

We want peace, conversation, and we also want to support our police who are right now under a great deal of stress in downtown Charlotte," said North Carolina Governor Pat McCrory.

"I have a passion and love for (the city). I' know every block of that city blindfolded and it's a beautiful, beautiful city with great people and it's a very good police department with good training and they're going through a difficult time and we as a nation and state are going to do everything before them to support them."

The investigation into the shooting of Keith Lamont Scott is ongoing.