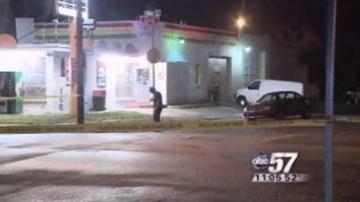 SOUTH BEND, Ind. -- One South Bend business is doing what it can to stop the violence happening in the west side neighborhood.

Ebrahim AImalabeh, the owner of The Olive Street Convenience Store, says he is fed up with the crime. His frustration all stems from a recent shooting that happened right outside his store, ending a teen's life.

AImalabeh says he has beefed up security at his store. He says he is also working more closely with neighbors to show them he wants this area to be safer just as much as they do.

Late this summer, someone shot and killed a teen right outside of the convenience store and because it's been the site of other crimes, rumors started flying and some neighbors started blaming the store's owner.

AImalabeh says he is not the problem, though.

"We did talk with the neighbors and now we are working with them," says AImalabeh.

Since the shooting Malabh has bumped up security by hiring N.S.A. Security, a fleet of armed security guards that he now has working around the clock and he says it's working.

"Oh, there's a big difference. People are at least feeling safe coming in and out of here, that is why we see kids at night, we have never seen that before."

AImalabeh says neighbors are seeing the difference too. He says neighbors expressed their thanks to him at a neighborhood meeting tonight, the third meeting held this month.

Neighbors say the new and improved Olive Street Convenience Store is a move in the right direction, but on the city's West side, this is just a band-aid for a much larger problem.

"Neighbors want to see action not just from me, but from police and the city," says AImalabeh.

People at these west side meetings are still looking for a leader to emerge. Right now, neighbors say they are sick of talking about what to do and hope they can soon implement some sort of action plan.