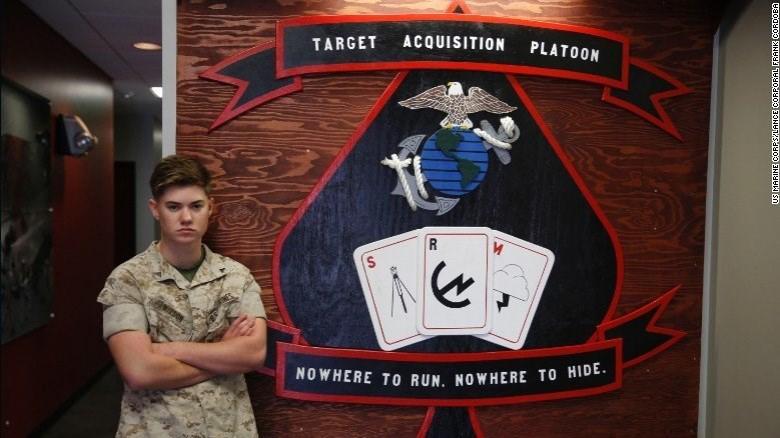 (CNN) -- Lance Cpl. Aaron Wixson is looking forward to the day he can attend the annual Marine Corps Ball in the outfit he feels most comfortable in.

Last Friday, he wore female Dress Blues to the gala at Pechanga Resort and Casino in Temecula, California. But next year, Wixson hopes to trade in the female uniform for the iconic Dress Blues worn by men -- the gender he identifies with even though it's not the one on his birth certificate.

"I will feel that I am finally seen as who I really am," Wixson told CNN, going public for the first time with his gender transition, which is ongoing. "I will be 100 times more comfortable, physically and mentally -- which will allow me to really enjoy the ball."

He's getting closer to his goal thanks to the new military policy that allows transgender people to serve openly. The 20-year-old field artillery radar operator is one of the first transgender Marines to be formally recognized by his command as a man.

The Tulsa, Oklahoma, native is utilizing the military's recently adopted "gender transition process," which took effect October 1. The policy, put in place after the Pentagon lifted the ban a few months earlier on transgender people serving, sets guidelines for troops who are transitioning to access healthcare. After Wixson completes his treatment plan, his name and gender will change in the Department of Defense database, and he can start dressing like a man and using male facilities.

The policy is part of the Pentagon's latest effort to make the military more inclusive, which top military leaders acknowledge is a work in progress. LGBT advocates applauded the military for taking the step but are waiting to see how the policy is fully implemented.

Wixson's command at the 11th Marine Regiment Headquarters at Camp Pendleton, California, helped arrange his interview with CNN to show its support for him and his transition.

Wixson enlisted in 2014, when he was still living as a woman. He had completed his freshman semester at Rogers State University in Oklahoma on a golf scholarship but the pull of the Marines was stronger. The Pentagon recently had opened combat to women and the self-described "tomboy" was set on becoming one of the first females in the infantry.

Earlier this year, a military mental health provider diagnosed Wixson with "gender dysphoria," a condition in which a person's gender identity differs from his or her birth sex. Knowing that a repeal of the military's transgender ban was in the offing, Wixson came out to his command as transgender.

With the help of his command, Wixson came up with a treatment plan to have his gender changed to male in the Department of Defense database, a change that would allow him to conform to male grooming standards and fitness requirements. For now, he's still using female bathrooms and uniforms.

A 'minimal' impact on troop readiness

Secretary of Defense Ash Carter in June repealed the military's ban on transgender men and women serving in its ranks.

"Although relatively few in number, we're talking about talented and trained Americans who are serving their country with honor and distinction. We want to take the opportunity to retain people whose talent we've invested in and who've proven themselves," Carter said at the time.

LGBT advocates called it a watershed moment, especially for transgender troops who have long been serving but could not be officially recognized. Critics, however, said they feared Carter's policy change would damage troop morale and unit readiness, as well as drive up the cost of healthcare.

A RAND Corporation study commissioned by the Department of Defense and published earlier this year concluded that letting transgender people serve openly would have a "minimal impact" on readiness and health care costs, largely because there are so few in the military's 1.3 million-member force.

The study put the number of transgender people in the military between 1,320 and 6,630. Gender-change surgery is rare in the general population, and the RAND study estimated the possibility of 30 to 140 new hormone treatments a year in the military, with 25 to 130 gender transition-related surgeries among active service members. The cost could range from $2.4 million and $8.4 million, an amount that would represent an "exceedingly small proportion" of total health care expenditures, the study found.

Wixson is encouraged by the military's response to his transition so far.

"They've worked very, very hard to get me the help I need and help me get through this process," he said. "I'm very lucky and grateful for their support."

His commanding officer, Col. Walker Field, said in an email that Wixson's decision to forgo an athletic educational scholarship and enlist showed his "exceptional character and patriotism."

"We are lucky to have such talent in our ranks and will benefit from his retention if he decides to undertake a subsequent tour of duty," Field added. "Every Marine in this command deserves the very best opportunity to reach his or her full potential, including LCpl Wixson. Enabling LCpl Wixson to openly serve as a transgender Marine necessarily increases readiness and broadens the overall talent of the organization."

Wixson may have his command's support, but many say it's too soon to tell whether others will experience the same acceptance. Advocacy groups have also criticized the Pentagon for not extending the healthcare benefits to dependents, retirees or veterans.

"There's so much fear in the transgender community. The policy is saying, 'yes, we support you,' but everyone wants to make sure the culture is supportive," said Army Staff Sgt. Patricia King, who came out as a transgender woman last year after more than a decade in the military.

"Culture takes longer to change than policy," she added.

When King began her transition, before the Pentagon lifted the ban, her command told her that they were behind her but did not have the authority to allow her to serve openly as a woman. At work, she used the men's restroom and barracks; at home, King wore a wig, makeup and dresses to meet friends and family socially after work.

"We finally removed the elephant from room and let us get down to business of doing our jobs," King said of Carter's ending the ban on transgender service. "When you're a closeted transgender person, it's not something that interferes with your ability to do your job, but it's always there. It's this nagging thing that you're always dealing with in the background. I'm excited that the DOD has come around."

Wixson's transition has been a long time coming, too.

Growing up as Arielle, he always wanted to be friends with boys and wear boys' clothes. He played all the sports, excelling in soccer and golf, and had a hard time sitting still.

In high school, Wixson came out as a lesbian, and that seemed to resolve his mixed emotions -- for the time being.

"It calmed my brain from the feeling of being different," he recalled. "I was OK with that. I was OK with liking girls."

Marine recruiters visited his high school when he was in 11th grade and sparked his interest in the Corps. The way they carried themselves and the Marines' reputation as the most physically challenging branch of the services spoke to him.

The infantry wasn't open to women, so Wixson signed up for artillery. He felt pride in being a female Marine and showing that a woman was physically capable of keeping up with the guys in the unit.

That excitement, Wixson realizes now, kept him from addressing a longstanding discomfort with his gender.

During combat training, "something didn't feel right," he said. Wixson started talking to transgender friends and the idea that he could be a man in a woman's body began to resonate. The professional diagnosis helped him fully embrace being transgender.

His family supports him, and he said he has not faced a backlash from the Marines with whom he serves.

They're "very curious," Wixson said. They ask a lot of questions about when he's going to get a haircut or surgery or start using the male restroom. Those who knew him as a woman have a hard time going with new pronouns. But thanks partly to his haircut, a high fade that straddles the line between male and female grooming standards, those who don't know him see him as a man, he said.

One hiccup Wixson faced was his decision to seek hormone treatment outside of the military health care system in May without informing his command, a violation of policy. He was slapped with an administrative reprimand that his command is now working to expunge, officials said.

After developing a treatment plan with his command, Wixson began hormone treatment through the military healthcare system. He hopes to undergo surgery to remove his breasts before the completion of his treatment plan May 2017. And he may be able to use facilities and adhere to grooming standards for men before then, thanks to an "exception to policy" request his command has put in on his behalf.

Until then, the male Dress Blues are hanging in his closet, waiting to be worn.

"I'm really grateful to be able to serve openly in the Marine Corps as transgender," he said. "When you get to be yourself you're a much more effective member of the team."