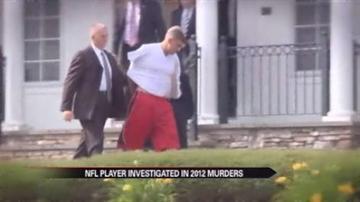 MASSACHUSETTS -- The former NFL player charged in his friend's murder could face charges in two other homicides.

Police say Aaron Hernandez may be linked to a drive-by double shooting in Boston last summer.

Wednesday, Hernandez was arrested on murder charges for killing his friend earlier this month. A judge denied his request for bail.

Prosecutors say they have plenty of evidence, including his rental car on surveillance video and a motive.

"The two of them had gone to a club on Friday night, they ended up spending the whole night together and there were certain things that had happened during the night that he was upset about and now didn't trust the victim," said Massachusetts Prosecutor William McCauly.

Hernandez signed a contract extension with the Patriots in August. The 5-year-deal was worth nearly $40-million. Hernandez has since been released from the team.