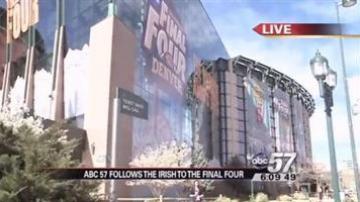 DENVER, Co. -- After two days and 1,100 miles, ABC 57's Jillian Mahen and Emily Pritchard arrived in the "mile-high-city" on Saturday evening ready to hit the ground running for full coverage of the 2012 Women's NCAA Final Four.

The Irish held an open practice on Satuday afternoon at the Pepsi Center in downtown Denver and signed autographs for their many fans.

The Irish are set to take on the UConn Huskies on Sunday at 6:30 p.m. EST for the fourth time this season.

The winner of Sunday's game will go on to play in the National Championship game on Tuesday evening.

ABC 57 will be covering all of the action and bring you updates on-air and online.