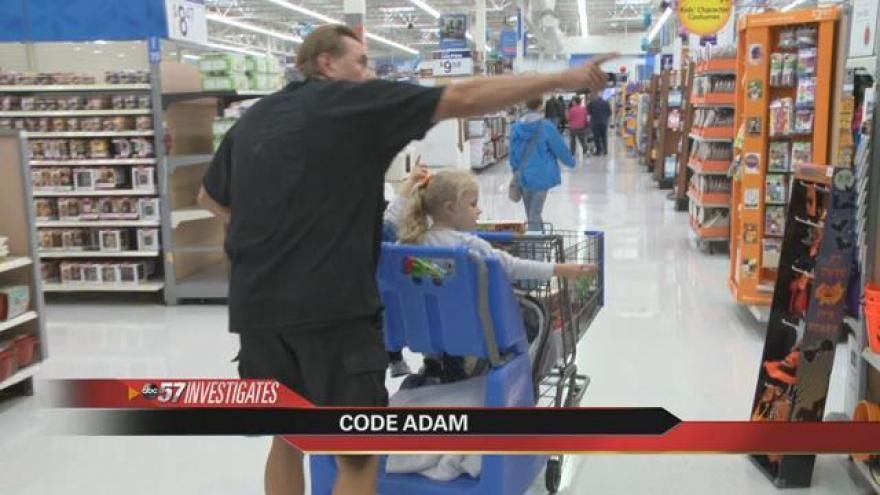 It’s a parent’s worst nightmare, the moment of panic when you turn your back for an instant and then discover that your child is gone.

Most times children who wander off are quickly found, but that isn’t always the case.

Code Adam is a nationwide protocol used by retailers all over the country to keep kids safer, it began at a Walmart in Indiana.

With the busy shopping season just around the corner, we set up a drill with Walmart and Mishawaka Police.

With local mom Anna Zaremba’s permission we tested how her children would react.

“I honestly hadn’t thought about talking to her about it yet too much because you always think you’re that close,” said Zaremba.

Undercover officer Mark Flemming played the part of the stranger, approaching Zaremba’s 5-year-old with mom nearby.

“She wouldn’t talk to him at all when he was talking to her in the aisle but as soon as she was back where she was comfortable sitting in the cart, it didn’t faze her at all that somebody else was pushing it and I wasn’t there,” said Zaremba.

Following Code Adam procedures, Walmart employees announced the kids’ descriptions over the loud speaker. Employees covered the exits and looked for the children. When the stranger reaches the front door, he is stopped by employees who attempt to keep him there until law enforcement arrives.

While following Code Adam stopped the stranger from taking the kids from the store that’s obviously not the case all the time.

Every year, the FBI gets more than 400,000 missing child reports.

“It’s time for us to start talking to our children again, make sure that they’re doing what they’re supposed to do especially when it comes to strangers,” said Lt. Tim Williams of Mishawaka Police.

“We need to reinforce that just because we know somebody for 30 seconds doesn’t make them our friend,” said Lt. Williams.

Lt. Williams says kids may get confused if the stranger claims he knows their parents. He suggests coming up with a code word shared between the parent and child.

“So that when that person picks you up, they have to know that code word, if they don’t know the code word then the child knows it’s not safe to go with them,” said Lt. Williams.

If kids are afraid, Lt. Williams says they should be encouraged to make a lot of noise.

“I want you to lay on the floor and throw that big temper tantrum that you’ve gotten in trouble for before and say this isn’t my mommy or this isn’t my daddy,” said Lt. Williams.

Lt. Williams says parents should remember that time is of the essence.

Authorities need to get your child’s information quickly.

“A parent is so distraught and not able to think straight a lot of the times. We tend to forget things while we are in a panic,” said Lt. Williams.

“With that information we can actually forward it out to the MDT’s, mobile data terminals, in our squad cars and the officer can actually have a picture of the ID on there with the child’s face,” said Lt. Williams.

Mishawaka Police will be at Lexus of Mishawaka on Grape Road making the Kid Print ID’s for free on November 5th from 10 a.m. to 1 p.m.

For more of the information about Code Adam, click here.