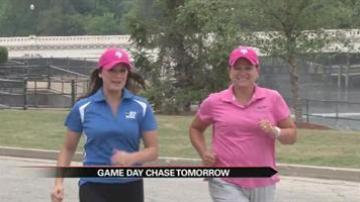 It used to be known as the Salmon Chase, but now Kelly Cares and the Michiana Runners Association along with ABC 57 are bringing the race back and are encouraging people to join in for a good cause.

It’s a 5 and 10k race through the streets of downtown South Bend and all of the money raised benefits local charities through the Kelly Cares Foundation.

Kelly says that staying active was an integral part of both of her recoveries from breast cancer. As a two time survivor she believes staying active is important to every woman not only for their health, but to set an example for their own family.

She reflected on her own battle and how fitness played a role.

Kelly said, “That was one of the hard things I was physically fit and did all the right things and didn't have any markers and they can still get it. It helps with your recovery and it's a good model for your kids and good all around.”

Kelly and Chappell hope that Michiana residents will show their support for breast cancer fundraising by running in the Game Day Chase.

Kelly says it’s just another way to get a head start on a long day of tailgating.

"You are getting up early to park the van or tailgate get half hour exercise in it's fun and you get extra time in your pregame that's what I am going to call it, pregame!”

You can register in person Saturday morning right near the Chocolate Café in downtown. The race starts at 7:15.