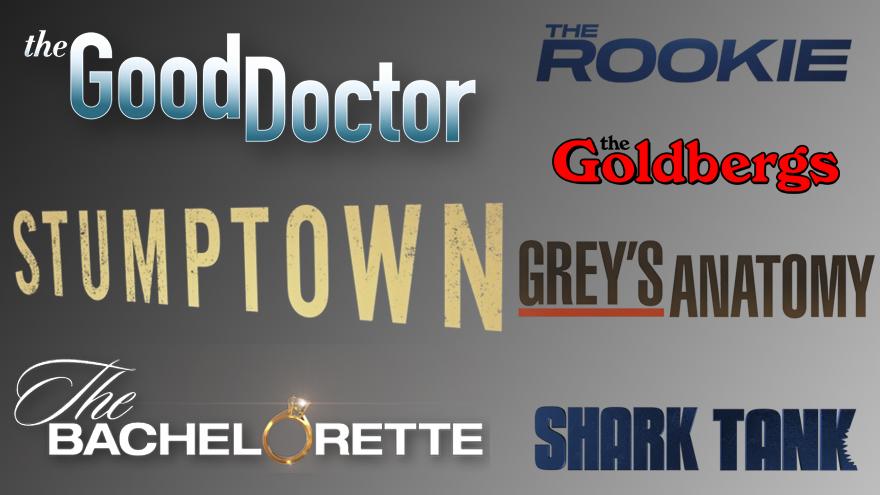 Returning shows include America's Funniest Home videos, The Bachelorette, The Conners, Dancing with the Stars, The Good Doctor, Grey's Anatomy, The Rookie and many more.

New seasons of American Idol, The Bachelor, black-ish, For Life and mixed-ish will premiere later in the season.

Descriptions for new and returning series:

From visionary storyteller David E. Kelley (   Big Little Lies) comes Big Sky, a thriller created by Kelley, who will write multiple episodes and serve as showrunner in its premiere season. Private detectives Cassie Dewell and Cody Hoyt join forces with his estranged wife and ex-cop, Jenny Hoyt, to search for two sisters who have been kidnapped by a truck driver on a remote highway in Montana. But when they discover that these are not the only girls who have disappeared in the area, they must race against the clock to stop the killer before another woman is taken. Based on the series of books by C.J. Box. Cast: Katheryn Winnick as Jenny Hoyt, Kylie Bunbury as Cassie Dewell, Brian Geraghty as Ronald Pergman, Dedee Pfeiffer as Denise Brisbane, Natalie Alyn Lind as Danielle Sullivan, Jesse James Keitel as Jerrie, with John Carroll Lynch as Rick Legarski and Ryan Phillippe as Cody Hoyt.

From Kari Lizer (   The New Adventures of Old Christine), this multicamera comedy follows an empty nester mom who wonders how she ended up alone while her children live their best lives thousands of miles away. She decides her place is with her family and as she reinserts herself into their lives, her kids realize they might actually need her more than they thought. Cast: Kyra Sedgwick as Jean Raines, Rachel Sennott as Jackie Raines, Joey Bragg as Freddie Raines, Patrick Brammall as Danny, Emma Caymares as Celia and Austin Crute as Lane.

ABC is bringing back the classic TV game show Supermarket Sweep, hosted and executive produced by Emmy® Award-nominated comedienne and actress Leslie Jones. The fast-paced and energetic series follows three teams of two as they battle it out using their grocery shopping skills and knowledge of merchandise to win big cash prizes. The original format aired on ABC from 1965-1967 and went on to become a global sensation. It was adapted in 13 international territories and, most recently, relaunched in the UK.

Hosted by Alfonso Ribeiro, America’s Funniest Home Videos is the longest-running prime-time entertainment show in the history of ABC. Each week, the AFV team evaluates thousands of user-submitted home videos to bring you America’s real-life funny moments captured on video.

American Housewife follows Katie Otto, a confident, unapologetic wife and mother of three, who is raising her flawed family in the wealthy town of Westport, Connecticut, filled with perfect mommies and their perfect offspring. Joining Katie in her perfectly imperfect world is her husband, Greg Otto, who supports her in every way possible but with a dash of reality thrown in as they work to raise their three children. Despite her flaws and unconventional ways, Katie ultimately only wants the best for her kids and will fight tooth and nail to instill some good old-fashioned values in them. American Housewife stars Katy Mixon as Katie Otto, Diedrich Bader as Greg Otto, Meg Donnelly as Taylor Otto, Daniel DiMaggio as Oliver Otto, Julia Butters as Anna-Kat Otto, Carly Hughes as Angela and Ali Wong as Doris.

After ranking as the No. 1 series of the summer in Adults 18-49 last year, The Bachelorette is set to return for its sizzling 16th season with Clare Crawley embarking on a new journey to find true love. Hosted by Chris Harrison.

TV’s No. 1 program in the Tuesday 8:00 p.m. half-hour this season in Adults 18-49, The Conners, follows America’s favorite family as they continue to face the daily struggles of life in Lanford. Dan, Jackie, Darlene, Becky and D.J. will continue to grapple with parenthood, dating, pregnancy, financial pressures and aging in working-class America. Through it all – the fights, the coupon cutting, the hand-me-downs, the breakdowns – with love, humor and perseverance, the family prevails. The series stars John Goodman as Dan Conner, Laurie Metcalf as Jackie Harris, Sara Gilbert as Darlene Conner, Lecy Goranson as Becky Conner-Healy, Michael Fishman as D.J. Conner, Emma Kenney as Harris Conner-Healy, Ames McNamara as Mark Conner-Healy and Jayden Rey as Mary Conner.

DANCING WITH THE STARS (SEASON 29)

Dancing with the Stars is the hit series in which celebrities perform choreographed dance routines that are judged by a panel of renowned ballroom experts and voted upon by viewers at home. The competition begins with an all-new cast of celebrities paired up with the show’s pro dancers, braving the dance floor together for the very first time. Each week these celebrities will endure hours of grueling rehearsals to master new dance styles and technical choreography to perform a dance. In the end, only one star will rise above the rest to be crowned champion and win the coveted Mirrorball trophy.

Dr. Shaun Murphy, a young surgeon with autism and savant syndrome, continues to use his extraordinary medical gifts at St. Bonaventure Hospital’s surgical unit. As his friendships deepen, Shaun continues to tackle the world of dating and romantic relationships, and work harder than he ever has before, navigating his environment to prove to his colleagues that his talents as a surgeon will save lives. The series stars Freddie Highmore as Dr. Shaun Murphy, Antonia Thomas as Dr. Claire Browne, Hill Harper as Dr. Marcus Andrews, Richard Schiff as Dr. Aaron Glassman, Christina Chang as Dr. Audrey Lim, Fiona Gubelmann as Dr. Morgan Reznick, Will Yun Lee as Dr. Alex Park, Paige Spara as Lea Dilallo and Jasika Nicole as Dr. Carly Lever. David Shore is the executive producer and showrunner. Daniel Dae Kim, Erin Gunn, David Kim and Sebastian Lee are also executive producers.

Grey’s Anatomy has solidified its place in television history as the longest-running prime-time medical drama ever. The highly beloved series is a cultural touchstone that continues to push boundaries with timely subject matter and characters that break the mold. Grey’s Anatomy follows Meredith Grey and the team of doctors at Grey Sloan Memorial who are faced with life-or-death decisions on a daily basis. They seek comfort from one another, and at times, more than just friendship. Together they discover that neither medicine nor relationships can be defined in black and white. Grey’s Anatomy stars Ellen Pompeo as Meredith Grey, Chandra Wilson as Miranda Bailey, James Pickens Jr. as Richard Webber, Kevin McKidd as Owen Hunt, Jesse Williams as Jackson Avery, Caterina Scorsone as Amelia Shepherd, Camilla Luddington as Jo Wilson, Kelly McCreary as Maggie Pierce, Kim Raver as Teddy Altman, Giacomo Gianniotti as Andrew DeLuca, Greg Germann as Tom Koracick, Chris Carmack as Atticus Link Lincoln and Jake Borelli as Levi Schmitt.

Friendship isn’t a big thing. It’s a million little things. When our gang’s dear friend Jon – a man perfect on paper – took his own life, his family and friends were left to pick up the pieces. Each of these friends is not living the version of life they thought they’d be living. And their friend’s death forces them to take a look at the choices they’ve made and to solve the unanswerable mystery of a man they thought they knew. A Million Little Things stars David Giuntoli as Eddie Saville, Romany Malco as Rome Howard, Allison Miller as Maggie Bloom, Christina Moses as Regina Howard, Grace Park as Katherine Saville, James Roday as Gary Mendez, Stephanie Szostak as Delilah Dixon, Tristan Byon as Theo Saville, Lizzy Greene as Sophie Dixon and Chance Hurstfield as Danny Dixon.

John Nolan, the oldest rookie in the LAPD, has used his life experience, determination and sense of humor to keep up with rookies 20 years his junior. Nolan is continually put to the test by a host of new challenges, romantic relationships and deadly criminals, as he looks to figure out what kind of cop he ultimately wants to be. The Rookie became Sunday’s No. 1 scripted broadcast series in its second season with Adults 18-49. The Rookie stars Nathan Fillion as John Nolan, Mekia Cox as Nyla Harper, Alyssa Diaz as Angela Lopez, Richard T. Jones as Sergeant Wade Grey, Titus Makin as Jackson West, Melissa O’Neil as Lucy Chen and Eric Winter as Tim Bradford.

The recipient of the 2017, 2016, 2015 and 2014 Emmy Award for Outstanding Structured Reality Program, Shark Tank features The Sharks – tough, self-made, multimillionaire and billionaire tycoons – as they invest in America’s best businesses and products. The Sharks will give people from all walks of life the chance to chase the American dream and potentially secure business deals that could make them millionaires.

Having delivered its most-watched season ever, Station 19 follows a group of heroic Seattle firefighters as they put their lives and hearts on the line. From the executive producers of Grey’s Anatomy, Scandal and How to Get Away with Murder, the series takes us inside the tough, tight-knit and sometimes heartbreaking world of the city’s bravest first responders. Station 19 stars Jaina Lee Ortiz as Andy Herrera, Jason George as Ben Warren, Boris Kodjoe as Robert Sullivan, Grey Damon as Jack Gibson, Barrett Doss as Victoria Hughes, Jay Hayden as Travis Montgomery, Okieriete Onaodowan as Dean Miller and Danielle Savre as Maya Bishop. Krista Vernoff serves as showrunner and executive producer.

Based on the graphic novel series, Stumptown follows Dex Parios – a strong, assertive and sharp-witted veteran with a complicated love life, gambling debt and a brother to take care of in Portland, Oregon. Her military intelligence skills make her a great PI, but her unapologetic style puts her in the firing line of hardcore criminals and not quite in alliance with the police. Stumptown stars Cobie Smulders as Dex Parios, Jake Johnson as Grey McConnell, Tantoo Cardinal as Sue Lynn Blackbird, Cole Sibus as Ansel Parios, Adrian Martinez as Tookie, with Camryn Manheim as Lieutenant Cosgrove and Michael Ealy as Detective Miles Hoffman.

WHO WANTS TO BE A MILLIONAIRE (SEASON 2)

Emmy Award-winning host Jimmy Kimmel returns as host and executive producer of Who Wants To Be A Millionaire 20 years after the prime-time series debuted on ABC in the U.S. The series features celebrity contestants playing for charity, bringing a guest of their choice along to help them answer questions: a relative, a beloved teacher or a famed trivia expert – anyone they want.