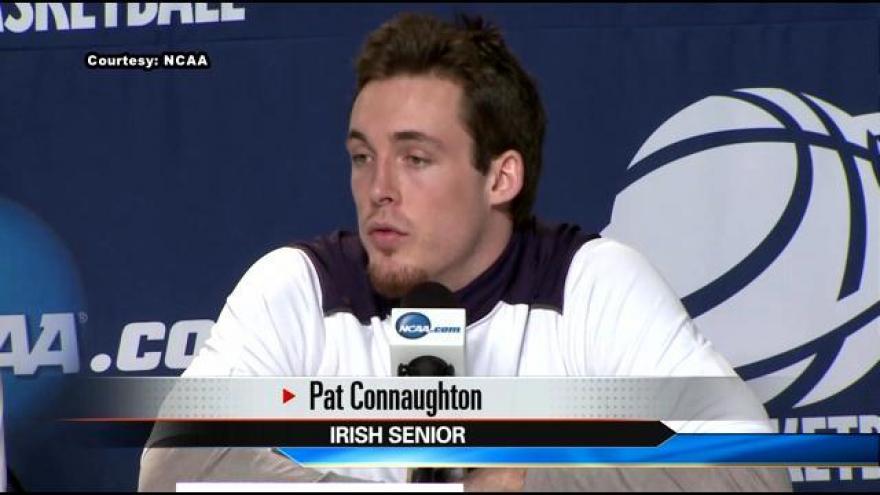 "The thing about Pat is, everyone told him leading up the baseball draft, do not say you're coming back to play basketball, it will hurt your draft status. And his dad and him say we're not going to 'B.S.' about that. We're coming back, we're going to finish this thing, Pat loves to play basketball, and he's intrigued about what the NBA thinks about him,” said Coach Brey.

If the Irish advance to the elite 8, it will be the first time that's happened since the team was coached under Digger Phelps in 1979.

Coach Brey says this is Connaughton's team. They listen to him, he's their voice on the court.

"I've not had anyone better. He's one of the all-timers and maybe the best I've ever had,” said Coach Brey.

But for Connaughton, it's not that simple. He's in love with two sports-- baseball and basketball.

Connaughton was picked in the 4th round draft by the Baltimore Orioles, but he says he had unfinished business to tend to at Notre Dame.

"A lot of people have made this experience for me one of, if not the best experience of my life so when it came down to making a decision, it really wasn't a decision for me to make. I kind of knew the whole time in my heart I wanted to come back,” said Connaughton.

While Connaughton says he can't pick between baseball and basketball, the team must defeat the Wichita State Shockers.

"The way I look at it is, I've been playing both of them my whole life. I don't want to burn a bridge before I see what's across that bridge and I made a promise to myself that I wouldn't give up on one before I saw it through,” said Connaughton.