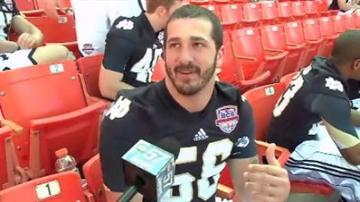 MIAMI BEACH, Fla. -- The banners are up. The field is being prepped. And Sun Life stadium is bustling for media day.

And for Miami native and lifelong Dolphins fan, Anthony Rabasa, it does not get any better than walking into the stadium where he will play for a national championship.

"We were walking in and I was like the guys that I've been looking up to since I was a little kid so it felt pretty cool walking in the tunnel and stuff like that," said Rabasa.

Alabama's freshman star Amari Cooper calls the sun and sand of Miami home also. And getting a chance to play in a national championship is why he chose to play at Alabama.

"Out of high school, I picked Alabama because a feeling that they would go again to the national championship just because of the coaching staff and type of players and I'm here now and it's great," said Cooper.

Notre Dame quarterback Everett Golson has led his team to 12-0 and now the South Carolina native has brought his team back to the Sunshine State. Which he says is the best part of the trip, so far.

And with those players who are from right here in Miami and even across the nation with this high caliber of a game. There's a high demand for family and friends to get tickets. Anthony Rabasa said they were allotted just six tickets for some of their closet friends and family to come cheer them on against Alabama.