ABC57 in Miami: Players dealing with the heat 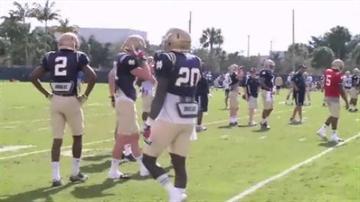 MIAMI -- Both Notre Dame’s and Alabama’s players have been practicing indoors for the last couple of weeks. In south Florida, they’re practicing outside in the south Florida heat. How are they dealing with the temperature change?

The warm temperatures in south Florida are a big change for Notre Dame’s players.

"It was a little bit of shock yesterday coming down there in the heat putting the full pads on like it was camp,” said Zack Martin, Irish offensive tackle.

For some on the Alabama roster the 80 degree temps are something they're used to, but just like the Fighting Irish, the Crimson Tide has been playing indoors for the last couple of weeks.

"You know we haven't seen sun in a while and to actually get into that game environment I think that's good for the team and good for our bodies to adjust to this weather,” said Robert Lester, Alabama defensive back.

Is the sun on the southern state's side?

"Pretty much we've both been inside these past couple weeks so we're probably both getting a feel for the weather,” said CJ Mosley, Alabama linebacker.

While there was a cloud over the tide's practice on Friday, the water was flowing and the players were sweating.

Players found another good thing about practicing outside.

"It was great to be back out there and smell real grass finally,” said Mosley.