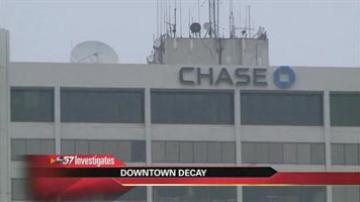 SOUTH BEND, Ind. -- Although there are potential safety issues in the Chase Tower in downtown South Bend, code enforcement hasn't issued any citations.

We asked the city of South Bend and the fire marshal when the Chase Tower was last inspected.

The fire marshal could not pinpoint an exact date.

The city says it will get that information to us as soon as they can. They said the inspector who oversees the tower was out in the field and they were having trouble connecting.

When asked whether there were plans to hold the owner accountable for fixing potential safety hazards the city and the fire marshal didn't have a comment.

The city said, "The department of Code Enforcement works with South Bend residents to help resolve issues that impact quality of life, including complaints concerning violations of zoning, sanitation and nuisance ordinances. Code Enforcement operates on a combination of resident complaints and inspector initiated citations, which means it must partner with residents and other concerned groups to resolve code violations. Code Enforcement's goal is to help neighbors resolve problems while seeing that violations are addressed."

The city's fire marshal says he plans on sending over an inspector in the next couple of days.

Catherine Toppel the former code enforcement director, says her office was in the process of inspecting the building before she resigned in March of last year.