ABC57 Investigates: Getting the gunman 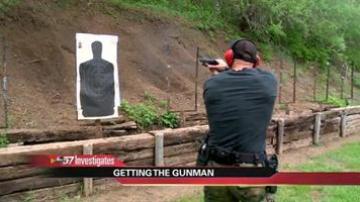 SAINT JOSEPH, Ind.-- When a shooter tries to take lives, officers in Michiana are trained to take control. But how are police officers trained just in case that fateful day comes?

With a quick look left- and a quick look right-an officer finds his threat. At first, he’s unaware of what lies before him. Our cameras were rolling when the Saint Joseph County Police Department training its officers in threat recognition and how to quickly bring down an active shooter

"It's definitely very realistic,” said Lieutenant Matt Blank, public information officer Saint Joseph Police Department. “I mean we are using our own firearms that have been modified to handle a different round. We are able to shoot back and forth at each other using protective equipment.”

I suited up and brought my camera along to film a realistic force on force shooting.

"What's going to happen is they're going be confronted with three individuals down at the end and each one has something different in their hand,” said Lt. Blank.

One is armed with a piece of paper, one holds a red plastic wrench, and one is packing heat. So when the officer in training spins around, he must act fast.

When the officers are firing at each other- they use something called simunition rounds. They're non-lethal training bullets filled with colored soap, and they use a conversion kit to load into the officer's normal duty gun.

“We also like to mark it with blue tape or blue markings of some kind. Often that means that it's a training weapon," said Lt. Blank.

But county officers aren’t the only ones training regularly here in Michiana.

That's why the Mishawaka Police Department is out at the range regularly, working on each officer’s shooting accuracy.

"I've never met a cop that doesn't like his gun so we train a lot,” said Sgt. Stefaniak. “We are at the range today and we have several guys coming in and they spend as much time as they can out here."

And the paper target doesn't stand a chance against the moves of Cpl. Rich Freeman. He springs up from a kneeling position, spins around and approaches his target. It's a move to bring down an active shooter that pops up behind him.

"Nobody wants to respond to that. That would be probably the most stressful situation anyone has ever responded to,” said Sgt. Stefaniak. “So for those guys to actually follow the way they've been trained- engage the way they engaged- they followed their training perfectly- those guys are heroes!"

He's talking about Elkhart Police Corporals Jason Tripp and Cody Skipper- the two officers in Michiana who responded and took down an active shooter at Martin's Supermarket in January. Those two officers just so happened to be the closest.

"If you're the closest officer you will respond,” said Sgt. Stefaniak. “And everybody who has taken our training is very receptive to that and ready to respond.”
Share this article: