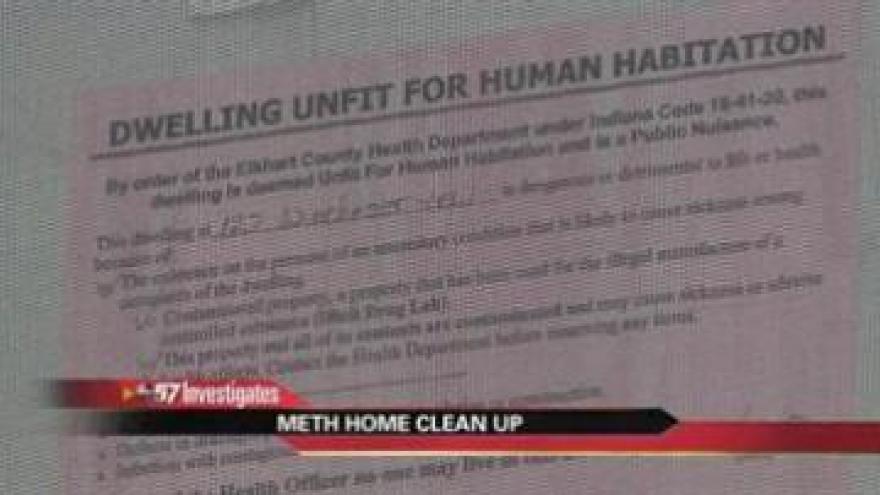 ELKHART, Ind. -- Indiana led the nation last year in the number of meth lab seizures with just under 1800. From trailers to apartments to moving cars, a large number of those busts occur in northern Indiana. But what happens to those places after the arrest is made?

After the meth lab is dismantled by police, it is the property owner's responsibility to clean up. In 25-percent of the cases, that doesn't happen.

The chemical residue left behind by a meth lab can cause headaches, kidney damage, birth defects and even cancer.

So why would people choose to break the law and live in contaminated houses?

It's a question we started investigating when the snow was still on the ground.

We knocked on the doors of three dozen condemned meth properties in Elkhart County and found several instances where people appeared to be living inside.

That's not only a significant health hazard, but a violation of state law.

"Every situation is different, "said Nivas Vijay of Heartland Environmental.

He's called in to take samples and determine whether a house is safe to live in.

If it isn't, it has to be scrubbed down and reinspected, a process that can cost more than $10,000.

"It's not the easiest process in the world. You have to hire people that are certified to do the work and afterwards, there just comes a cost for each homeowner. Not everybody has that type of money sitting around," said Vijay.

For some families, they don't have much of a choice.

One family lives below an apartment raided in May of last year.

The vapors were so intense; the family was forced to move out for a few weeks while the owner aired out the top.

Because they don't share an air duct, the family was allowed back in and can continue to live on a different floor.

"That can get complicated, because these old houses have been changed and renovated, so now they can hold multi-units," said Tara Still of the Elkhart County Health Department.

Still says 75-percent of homes busted for meth get cleaned up.

Environmental Health Services monitor the others as best they can; checking on them once a month, but inspectors and police can't be there 24 hours a day.

Still depends on good communication between neighbors and police.

"They drive by these properties - it may be one they're looking at already. If you can tell them certain days and times when there's more activity, then that's just more help for them," said Still.

Meth labs can be anywhere. Some have been found in hotels, apartment complexes and even one was on a boat.

More information about cleaning up property